Home / Dartmoor Traditions / Get Off My Lands

Get Off My Lands

“Get off my lands,” – since prehistoric times mankind has seen the need to clearly define its tribal lands by means of boundaries marked by various landscape features. These age old boundaries encompass countries, counties,boroughs, towns and parishes – right down to personal properties. One age-old tradition whereby communities renew their claims to those lands and rights belonging to them is a ceremony known as ‘Beating the Bounds‘. The main purpose of ‘Beating the Bounds’ was to instil in the younger generations the defined boundaries of their communities. Such events also serve as social occasions and also in some cases the opportunity for neighbouring territories to dispute certain boundary claims. Although still carried out today such events pale into insignificance compared to times gone by, whereas at one time hundreds of people took part today the numbers are likely to be a lot less. On many occasions the proceedings would involve vast quantities of food, drink and sports along with various mis-haps, all of which added to the spirit of the day.
Back in 1908 Okehampton held their ‘Beating of the Bounds’ tradition every seven years however today it’s every five years. Although much of the town of Okehampton is just outside today’s National Park boundary much of their lands come within it. The following report appeared in the Western Times on the 3rd of July 1908 and relates their ‘beating the Bounds’ which took place on the 1st of July:
“Once in seven years the townsmen of Okehampton beat what is known as their ‘common’ bounds. The town and parish own certain rights over the moorland wastes, extending beyond Meldon towards Sourton Tor, thence along the banks of the Okement to Sandiford (Sandy Ford), Dinger, Harter, Culliver (Cullever) Steps, and back to Symon’s Ditch. It is about a twelve mile radius, and within it is the  site of the Artillery Camp and the ranges, for which the War Office pay the Okehampton Borough and Parish Council an annual acknowledgement of about £250 a year. The observation of these rights is regarded by Okehampton as a great matter of importance.
The septennial visit to the boundary stones was p[aid on Wednesday. At ten ‘o clock the time fixed for the start, there was unwanted bustle in the quaint town, which though itself  600 feet above sea level, lies down deep in the valley shadowed by the hills and tors rising another 500 or 700 feet. The sun was blazing intensely, and it was evident that the day was to be one of tropical heat. But brilliant sunshine and dry weather are ideal conditions for Dartmoor. Remarkable is the difference between the climate in the valley and that on the hills. Down in the town everybody is sweltering in the heat, but a five minutes’ walk up the hill towards the Artillery Camp takes one into a new refreshing and invigorating atmosphere. The breeze becomes cooler the higher one ascends. “When you are up there,” remarks a well known Oketonian, pointing to Holstock (Hallstock) Hill to the left of the camp, “you will be able to run about without getting too warm or too tired.” And, indeed although there is no shade on the hills, and the sun is shining brilliantly, you feel as if you have got rid of a heavy burden. The atmosphere was very clear, and it was possible, in the magnificent panoramic view, to identify places forty or fifty miles off as the crow flies.
No wonder, then, with such favourable conditions Oketonians assembled in large numbers to join in the tramp to the boundary stones, which dotted about the moor, define the limits of their rights to the commons. Many ladies and gentlemen were mounted – some on the sure-footed moorland ponies, and others smart looking hunters. One young lady was sufficiently up-to-date to ride astride. A still larger number of the party trusted to Shanks’ Pony. A veteran moorman, George Seymour, who has seen more than eighty summers, was appointed to act as guide, and there are few tracks on this side of Dartmoor unknown to him.
Although the route was only about twelve miles, so rough is the ground in some parts that it was expected that the journey would occupy between two and three hours. It had been arranged that the programme should be wound up with an al fresco luncheon, free to all, and sports on Holstock Down, where a large quantity of substantial provisions, with a varied assortment of beverages, the cost of the whole of which is defrayed by subscriptions, had been stored in a barn kindly lent by Mr. Hodge. Thither a portion of the Committee, who did not go the round, were stationed to make arrangements for at once meeting the wants of the hungry and thirsty  party as soon as they arrive. The Committee did not wish to provoke a general raid on the commissariat stores. It was two o’ clock before the advance guard of horsemen hove into sight, and soon the crowd around the barn numbered several hundred. Seated on the ground, they patiently awaited their turn to be served. Members of the Committee distributed cakes, sandwiches, beer, cider and mineral waters. Nobody was denied. Needless to say, the provisions quickly disappeared, although apparently there was sufficient for all. A little commotion was caused by the bursting of a ginger-beer bottle in the hands of Mr. Smale of the Okehampton Arcade, who had a severe cut in the head, rendering him temporarily unconscious. The wound was bandaged by the police, whose ambulance knowledge proved valuable, and Mr. Smale soon recovered. 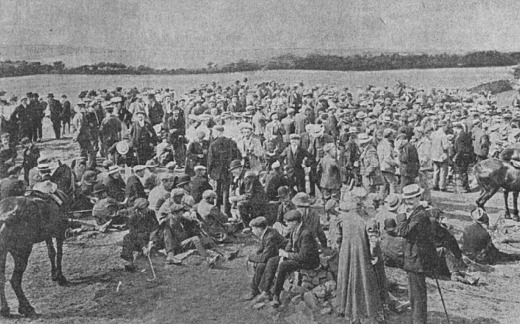 The ‘Feeding of the Five Thousand’ on Halstock Down

The journey was not devoid of incident. Near Sandiford Mr. R. Parker’s pony got stogged in one of the treacherous bogs, and threw its rider. Both, however, succeeded in extricating themselves from their awkward predicament. At Dinger, Mr. Barrington met the beaters, and, on behalf of the Duchy of Cornwall, offered, in a formal manner, an objection to Okehampton’s claim to enforce their rights to the commons quite so far in that direction. The protest wa made for the purpose of entering it on the records. The Duchy, we believe, contend that the boundary line is from Sandiford direct to High Willis (Willhays), but the beaters went from Sandiford to Dinger Head and back to High Willis. There was another little dispute at Sourton, the parishioners of which claim that the rights to the common from Sourton tor to Sandiford belong not to Okehampton, but to them, and so Mr. Northcote, in order to place on record the fact that Sourton had in the year of grace nineteen hundred and eight asserted it alleged rights, accompanied the beaters to what they assert if the real boundary at Sandiford.
The old English sports on Holstock Hill were very amusing and exciting, and were witnessed by several hundred people…”

At one time Okehampton’s ‘Beating the Bounds’ ceremony was held on Ascension Day and traditionally there were two ways in which the younger generations got to know that location and name of each boundary marker. The first was how a elder from the parish would strike the boundstone with his walking stick whilst the beaters would recite the name of the stone. The second method was a practice known as ‘Spurling‘. A wet and boggy patch would be found near to each boundary point into which apples were thrown, the youngster would then scrabble about in the miry mud to retrieve them. By doing this, one must admit, the location would certainly be etched in young memories.
One comment in the above report serves to show how in 1908 attitudes were slowly changing – that is; “One young lady was sufficiently up-to-date to ride astride.” The very fact that she was brave enough to fly in the face of convention and actually sit astride her mount as opposed to riding side saddle would have in some quarters be deemed as unladylike and therefore noteworthy.