During one of his banishments from the royal court, Piers Gaveston is said to have hidden himself on Dartmoor until which time it was safe to return. Local legend has it that during his time on Dartmoor he ventured out to Crazywell Pool. His purpose for visiting the pool was to consult the ‘Witch of Sheepstor’ in order to find out if it would be safe to return to court. Her advice was; “Fear not, thou favourite of the king, That humbled head shall soon be high.” Taking this to mean it would be safe he made his return but sadly had mis-interpreted the witch’s words for on Blacklow Hill, near Kenilworth two Welshmen ran him through with their swords and then beheaded poor Galveston. In 1863 the Rev. E. W. L. Davies, a Unitarian Minister wrote the following poem which tells the events of Piers Galveston’s time on Dartmoor, his visit to Crazywell Pool and his eventual demise.

Twas a stem scene that lay beneath
The cold grey light of autumn dawn;
Along the solitary heath
Huge ghost-like mists were drawn.

Amid that waste of loneliness
A small tarn, black as darkness, lay,
Silent and still: you there would bless
The wild coot’s dabbling play.

But not a sound rose there – no breeze
Stirred the dull wave or dusky sedge;
Sharp is the eye the line that sees
‘Twixt moor and water’s edge.

Yet on this spot of desertness
A human shape was seen;
It seemed to wear a peasant’s dress,
But not with peasant’s mien.

Now swift now slow the figure paced
The margin of the moorland lake,
Yet ever turned it to the East,
Where day began to wake.

Where lags the witch? she willed me wait
Beside this mere at daybreak hour,
When mingling in the distance sate
The forms of cloud and tor.

She comes not yet; ’tis a wild place
The turf is dank, the air is cold;
Sweeter, I ween, on kingly dais,
To kiss the circling gold;

Sweeter in courtly dance to tell
Love tales in lovely ears;
Or hear, high placed in knightly selle,
The crash of knightly spears.

What would they say, who knew me then,
Teacher of that gay school,
To see me guest of  savage men
Beside this Dartmoor pool?”

He sat him down upon a stone –
A block of granite damp and grey
Still to the East his eye was thrown,
Now colouring with the day.

He saw the clouds all seamed with light,
The hills all ridged with fire;
He saw the moor-fogs rifted bright,
As breaking to retire.

More near he saw the down-rush shake
Its silvery beard in morning’s air;
And clear, though amber-tinged, the lake
Pictured its green reeds there.

He stooped him by the water’s side,
And washed his feverish  brow;
Then gazed as if with childish pride
Upon his face below.

But while he looks, behold him start,
His cheek is white as death!
He cannot tear his eyes apart
From what he sees beneath. 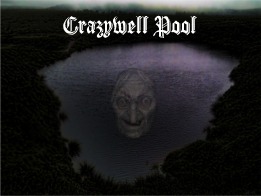 It is the Witch of Sheepstor’s face
That grows from out his own!
The eyes meet his-he knows each trace-
And yet he sits alone.

Scarce could he raise his frighted eye
To glimpse the neighbouring ground,
When round the pool-white- dense, and high-
A wreath of fog was wound.

Next o’er the wave a shiver ran
Without a breath of wind;
Then smooth it lay, though blank and wan,
Within its fleecy blind.

And o’er its face a single reed,
Without a hand to guide it, moved;
Who saw that slender rush, had need
More nerve than lance e’er proved.

Letters were formed as on it passed,
Which still the lake retained;
And when the scroll you traced at  last,
The reed fell dead, the lines remained.

On them the stranger’s fixed eyes cling,
To pierce their heart of mystery:
Fear not thou favourite of a king,
That humbled head shall soon be high.

He scarce had read, a sudden breath
Swept o’er the pool and raised the lines;
The fog dispersed, and  bright beneath
The breezy water shakes and shines.

He looked around. but none was near-­
The sunbeams slept on moss and moor;
No living sound broke on his ear-
All looked as lonely as before.

What had he given that hour to see
The meanest herdsman of the hill!
For, bright as seemed the prophecy,
A shadow dimmed his spirit still.

And well it might! the wanderer there
Had stood too near an English throne
Had breathed too long in princely air:
He was the banished Gaveston.

Again he turned-again he flew
To the boy bosom of his king-
Trod the proud halls his vain youth knew,
Heard woman’s voice and minstrel’s string.

But double was the story told
By the dark words of evil power,
And not Plantagenet could hold
The Fates back in their own dark hour.

Oh, how should evil deeds end well I!
Or happy fates be told from hell I!