In the 16th century the importance of Plymouth grew and accordingly so did its population. It then soon became apparent that the existing water supply was insufficient for the demands placed upon it. So in 1576 Robert Lampen lead a team of surveyors in search of a route for a leat. Thus having found that the River Meavy and it’s watershed would provide the water source a Water Bill was submitted to Parliament in 1584. The Bill gave permission to: “digge and myne a cliche or trenche contayninge in breathe betwene sixe or seaven foote over in all places throughe and over all the lands and grounds lyeing betwene the said towne of Plymouth and anye part of the said ryver of Mewe als said Meyve and to digge, myne and breake, baulk, cast upp all and al mener of rockes, stones, gravel and sandes and all other lets in anye place or groundes for the conveyance or necessaire conveyenge of the same ryver to the said towne…“ The Building of the leat was handed on to a committee who amongst its members held Sir Francis Drake. The bill received Royal Assent on the 29th of March 1584 and work began in 1589. The main contractor for the scheme was Sir Francis Drake. The course of the leat was about 7 feet wide and 18½ miles long, it ran from the River Meavy to Sutton Pool and was officially opened on the 24th of April 1591. The whole project cost Drake £300 which included building costs and compensation to local landowners. A team of local tin miners was used to cut the leat because of their undoubted engineering skills in leat building. It was said that on the opening day Sir Francis Drake, mounted on his white horse, rode escort to the waters as they flowed down the new leat to Plymouth. This leat became known as ‘Drakes Leat’ and provided water to the Plymouth area for over 300 years. Sometime after Drake brought the water to Plymouth it was decided to celebrate the fact by holding an annual ‘Fyshinge Feaste’. The actual ceremony consisted of the Mayor of Plymouth and his council going to the head weir of the leat where official toasts would be given. The first involved filling a goblet with water taken from the leat and then each person present would partake of the goblet and toast “to the pious memory of Sir Francis Drake.” This ceremony soon became part of one of Dartmoor’s traditions. In 1889 the ceremony took on a more significant occasion as it was on this occasion not only was Sir Francis Drake celebrated but also it was the first time water began to flow into the newly constructed Burrator reservoir.

In the September of 1898 the ‘Fyshinge Feaste‘ included a special celebration insomuch as it also commemorated the construction of the Burrator Dam which once again was a project designed to provide Plymouth and its growing demands with much needed water supplies. Usually it was only invited guests who attended the ‘Fyshinge Feast’ and was deemed as being little more than a ‘picnic’ for Plymouth’s municipal governors. However, on this special occasion it was decided to invite members of the magistracy, the Borough Council, the Board of Guardians and the School Board all accompanied by their “ladies”. On the day two special trains were laid on which conveyed the 600 guests to Dousland station where carriages and wagonettes were provided for those who wanted to ride up to the reservoir. Due to the shortage of conveyances some of the guests elected to walk up to the head of the leat where the ceremony was to take place. In addition to the invited guests it was decided to allow the general public to attend and in order that they do so the Mayor of Plymouth declared a partial holiday for the city. All the schools were shut for the day and the majority of the shops were closed before noon. In order to convey the expected crowds the Great Western Railway ran special trains every half hour from Plymouth to Yelverton. Initially it was planned to erect a temporary platform at Burrator but the Board of Trade vetoed that idea for safety reasons.  Once again carriages and wagonettes were available from Yelverton to Burrator and although some took the opportunity of a lift many chose to walk the distance. Additionally wagonettes and charabancs ran from Plymouth to the reservoir and those fortunate enough to own their own conveyances also made the journey from around the district.  For many one of the purposes of the visit was to see the completed reservoir brimming with water for others they expected at least to see the bed of the construction concreted over. Alas, all that was visible was virtually a gert big hole.  What was evident was the mighty dam,  the old farm hedges on the bed of the reservoir having been scrubbed out, and the ruins of two farmhouses and the old caretaker’s cottage at  Head Weir. To give an idea of what the water depth of the reservoir would be when filled white flags were placed at intervals on both sides of the valley 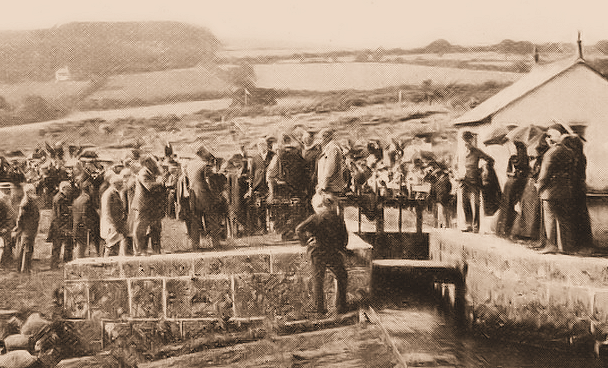 At noon the corporation and their guests assembled at Head Weir to begin the Fyshinge Feaste ceremony to toast the memory of Sir Francis Drake. It was also recognised that this would the last time the centuries old custom took place at Head Weir as the next time it would be held the location would have been submerged under fathoms of water. In order that the solemnity of the occasion and to prevent overcrowding two enclosures had been erected, an inner one reserved for  the members of the Corporation and officials and another  for the invited guests. As far as Joe public were concerned they were ushered onto the surrounding slopes around the valley sides. Whilst the invited dignitaries were assembling in the various enclosures the Plymouth Borough Band entertained them with a “choice selection of operatic and other music. At the appointed hour the Corporation and their guests in the inner enclosure formed up a double line  from the Weir to the boundary. A goblet was filled with water from the leat and Mr. E. Sandeman the water engineer handed it to the chairman of the Water Company who drank from it and toasted “To the pious memory of Sir Francis Drake.” The goblet was then passed down along the lines with each person drinking to the same sentiment. Another goblet was then  filled with wine and Mr. G. G. Davey handed it to the Mayor who drank another toast – “May the descendants of him who brought us water never want wine.” Again the goblet went along the line with the same sentiment being echoed. The Corporation and their invited guests then made their way over to Longstone Manor to a large marquee for luncheon, the caterers being Messrs. Risdon and Sons from Plymouth.

Having done justice to the luncheon the people then made their way over to the newly constructed dam where a memorial stone was to be laid at 3.00 pm.. The laying of the stone also marked the shutting of the valve which was to intercept the flow of water from the River Meavy. By the time the Mayor, the Corporation and guests had arrived at the dam it was estimated that 6,000 people had assembled in and around the valley sides which overlooked the dam. So many vehicles of one sort or another had arrived at Burrator that the newly constructed road was completely blocked. Eventually Sir Massey Lopes arrived and was received by the Mayor and members of the Water Committee and then Mr. E. Sandeman invited the Mayor to lay the final stone which completed the dam. The wording on the memorial stone read – “Borough of Plymouth – Burrator Reservoir – Commenced 1882 – Completed 1889 – J. T. Bond Mayor and Chairman of the Water Committee 1891 – 1898 – James Menserch  Edward Sandeman Engineers – .” Both the Mayor and Sir Massey Lopes then made their speeches after which a silver loving cup was presented to the Mayor by Sir Massey Lopes. It was inscribed on one side with – “Presented to Alderman John Thomas Bond, Mayor of Plymouth, on the completion of Burrator Reservoir and the work authorised by the Plymouth Water Act 1893, in recognition of the able and zealous services rendered by him to his native town, as chairman of the Water Committee from 1891 to 1898, during which period the works were designed, authorised by Parliament, and successfully carried out.” The statistical information and other interesting facts associated with the water undertaking were inscribed on the other side. The Mayor then made another speech thanking Sir Massey Lopes for the gift and also his co-operation in the water project. The final duty of the Mayor was to raise a flag which was the signal for the water valve to be shut of and the water to begin filling the reservoir. This act was greeted with enthusiastic applause from the gathered crowds and accompanied by a merry peal of bells from nearby Sheepstor church. The Rev. S. Vincent then concluded the ceremony with a lengthy prayer which was followed by the Lord’s Prayer after which people made their way back to Plymouth or their respective homes. The whole day was rounded off with a banquet in Plymouth’s Guildhall at which over 400 guests attended, each being presented with a bronze medal as a souvenir of the day’s occasion – see above.