“Water colours by F. J. Widgery are an acquisition to any gallery. He has devoted himself whole-heartedly to the charms of the West of England scenery. His sensitive colouring and “live” feeling are revealed in beautiful pieces of work.” – 1927.

If asked who is my favourite Dartmoor artist of all time I would no doubt opt for F. J. Widgery for many of the above reasons where the Dartmoor landscape is concerned many more besides. Fredrick John Widgery was born in 1861, the son of another noted artist William Widgery who also produced many Dartmoor landscapes. F. J. Widgery began painting whilst studying at the Exeter Cathedral School. He then attended the Exeter School of Art from whence he progressed to the South Kensington Art Schools and from there to the Antwerp Academy in Belgium.  His next progression was to return to England where at an art school in Bushey, Hertfordshire, he studied under the portrait artist (amongst other talents) Hubert Von Hukomer.
Having completed his training and after a short  spell in London Widgery decided to return to Devon and by 1883 he had joined his father at his studio in Exeter which was opposite to the Royal Albert Memorial Museum. It was here that he began studying under the auspices of John Syer another well-known Devon artist. On the 6th of January 1883 the Express and Echo published the following; “Visitors to Mr. Widgery’s studio will be pleased to notice some excellent examples of the work of his gifted son, Mr. F. J. Widgery, who is now studying under Syers, and whose vigorous style he seems to have caught with much success. Mr. Syers and the two Widgeries spent a month or two on the Moor in the fall of last year, and some fruits of their studies are to be seen in several exquisite transcripts of the scenery in the immediate neighbourhood of Lydford House. Mr. F. J. Widgery and his talented sire are to be congratulated on the rapid progress which the younger artist has made. He has benefited so much by studies on the Continent and by his friendship of Mr. Syers that his pictures are finding a ready sale in the metropolis; and those who have the means of judging predict for him a career of even greater prosperity and a wider fame than his father has enjoyed.”  He also secured a second home on Dartmoor which was situated jus off the corner opposite to the Dartmoor Inn which led to Lydford. By 1884 the above predictions were coming true as his work began fetching good money, one piece called “On Dartmoor” was sold for seven guineas at an exhibition at the Royal Public Rooms in Exeter. In 1888 he exhibited in the Royal Cornwall Polytechnic Societies’ exhibition at Falmouth with a work called “A Moorland River”. This received the following acclaim, “Nearby hangs one of the most important landscapes in the gallery – F. J. Widgery’s “A Moorland River,” a work suggestive of the father’s dash combined with the fidelity of his master, the late John Syer, and a delicate feeling for colour all his own.” – The Western Morning News, September 8th, 1888.

Throughout his career he travelled extensively around Dartmoor, Exmoor and the coast lines of Devon painting the landscapes. This was around the time where Dartmoor was becoming a popular place for artists, writers, historian, archaeologist and visitors alike. This gave his career and reputation a boost in many ways. Brian Le Messurier commented in his book – ‘Dartmoor Artists’ how, “at their best, F. J’s paintings have an Elgarian nobilmente about them which is entirely appropriate given the period in which they were produced. His art was an expression of the golden age of Dartmoor, the years from about 1885 to the beginning of the First World War. This era saw the publication of the first novels of Eden Phillpotts and those of John Trevenna; Baring-Gould’s livery output was in full flow, serious archaeological enquiry had begun, and William Crossing was active both in the local press and as an author of (mostly) non-fiction books about the moor.” – p.51. Throughout his career Widgery’s works appeared in numerous publications. In 1894 H. C. O’Neil’s book – ‘Told in the Dimpsies’ included a frontispiece by Widgery. He also produced 22 landscape works for the 3rd revised edition of Samuel Rowe’s ‘Perambulation of Dartmoor’. Sadly due to printing restraints these were only produced in black and white in the book. However, all 22 were reproduced in colour in a book called “A Vision of Dartmoor’ in 1988. Again linked with the growing popularity of Devon and Dartmoor along with the vast improvements in rail services the Great Western Railway produced a series of advertising posters called ‘Glorious Devon’. In 1925 F. J. Widgery’s landscape of Tavy Cleave was used as one of the posters and reproductions of this still can be purchased today in various forms.

F. J. Widgery was also a campaigner for the preservation of Dartmoor. He became involved with the campaign against the early Dartmoor Range proposals. In the March of 1921 it was proposed to open a quarry at Ivy Tor to supply stone for road building and repairs which soon received numerous objections from all quarters. Amongst those concerned that the beauty of the tor and the nearby Taw Valley would be ruined was F. J. Widgery who published letters in the local press. In order to amplify his objections he produced a landscape called ‘Valley of the Taw’. This was carried out by request of the Western Morning News and Mercury and was reproduced in their paper on the 22nd of February 1921. The paper suggested that; “the drawing proves to even the casual observer that to pursue any disfiguring enterprise of the nature contemplated would be nothing less than vandalism.”

Outside of his artistic life Widgery played various other roles. He became captain of the 1st Devon and Somerset Royal Engineer Volunteers, he became elected to the Exeter City Council in 1898 followed by being elected as Mayor in 1903. In 1905 he was made Honorary Freeman of Exeter followed by becoming an Alderman four years later and in 1912 he became a Justice of the Peace. He was also a member of the Rotary Club. Another accolade which he is remembered for is the fact that his initial FJ were used as the prefix for the motor car registration plates for the city of Exeter. Fredrick John Widgery passed away at a nursing home in Torquay on the 26th January 1942 at the age of 81, he was buried in Exwick Cemetery.

Whilst researching Mr. Widgery I stumbled upon a sale notice which appeared for the Eland’s Gallery in 1913 as seen above. A the painting had been shown in an exhibition and as you can see below the highest amounts were £8. By using the Bank of England’s inflation calculator £8 in 1913 equated to £982 in 2021. Looking around the recent sale-room prices F. J. Widgery’s works fethc from between a few hundred pound to around a thousand pounds which seems rather odd?
In conclusion, I still maintain that many of F. J. Widgery’s works are stunning, several, although not originals adorn my study walls and always are a pleasure to admire when passing. To me it was his ability to capture the everchanging light in the Dartmoor landscape and indeed many of the things to be seen in it. 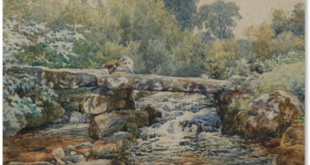