“A bit of news I think I have for lovers of Dartmoor is that just above this farm Drywell built into a walled hedge is the upper part of a regularly shaped stone cross. My farmer-hot remembers it being put into that position, but he does not remember  anything about the shaft of the cross, or the original position of the cross. Is this an addition to the known Dartmoor crosses?” – The Western Morning News, July 13th, 1937.

In answer to this correspondent one must reply possibly not for in that same year Masson Phillips was describing a cross head built into the roadside wall near Drywell. Whether or not this was a follow-up from the newspaper report is anybody’s guess. Clearly as far as the locals went it certainly was not a new addition but probably one that had simply faded from their mind libraries. One certain thing is that the cross never came to the attention of William Crossing as there is no mention of it in his ‘The Ancient Stone Crosses of Dartmoor’ which was a series of articles in the Western Antiquity published in 1884. During this period the original shaft was nowhere to be seen and the head remained in-situ until the 1950s. It was then that Harry Starkey got on the case and went to Drywell to investigate. He discovered that sometime after 1937 that the head had been removed from the wall and was dumped on the roadside verge where is quietly lay for quite a while and then simply vanished. Once again Starkey was on a mission and after an exhaustive search found the head lying on a rubbish dump in a nearby field. In the Boddy Collection there are two old photographs of the cross head, one depicts it in the wall – HERE and the other dumped by the roadside – HERE. Having re-discovered the cross Starkey then brought this to the attention of the Dartmoor Preservation Society and suggested it might be an idea to restore the cross.  The first task was to locate a suitable shaft on which to mount the head, one was eventually found in the grounds of a house called Critchel at Totnes. The two sections were ‘married’ in 1967 under the auspices of Mr. Masson Phillips and sited where it sits today. It is thought that originally the cross was placed beside a junction where the inhabitants of nearby farm joined the ancient Widecombe Church Path. Like many other of the crosses to be found on Dartmoor Drywell Cross can be classified as a ‘Wayside Cross’.  The purpose of which was for; “marking the various tracks and to serve as guide posts, both on the open moorland and elsewhere. It has been suggested that the arms of each cross would point in the direction of the track that it marked, but so many of the crosses have been re-erected it is impossible to validate this theory.” – Sandles, p.7. Spence Bate also adds; “Most of these have the emblem of the cross engraven on the side towards the road… and were generally placed where two or more roads met.” – p. 25. 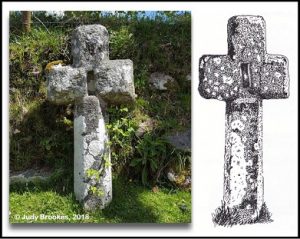 Thanks to Judy Brookes for the above photo.

As far as Dartmoor crosses go this one is unique insomuch as it has a rectangular niche cut into the shaft between the two arms. The purpose for this is unsure but possibly it was to house an icon of some descript? Today it’s often used as a receptacle for small votive offerings of various kinds. The vital statistics of Drywell Cross are – Height 1.32 metres, Arm span 65 centimetres, circumference 80 centimetres and on a present alignment of NNW – SSE. Today the cross is scheduled as a Grade II listed building and dated as being of medieval origin (between 1066 and 1539). Just like Hawson Cross this cross also stands near a venerable old oak tree along with some fine examples of pollarded trees and depending on the time of the year a Foxglove usually stands shoulder to shoulder with the cross.

“Not far up the hill to the north, at a road junction, stands an old wayside cross. A tiny niche is cut into its face. Nothing seems to be known about the cross’s origin. At one time its head was built into a nearby wall. Then it was discarded for some years until an old shaft was found elsewhere which made a suitable match. The two were united and the cross stands once again as a waymark, perhaps not far from its original position by the path to Widecombe church.” – J. Hayward, Dartmoor 365, p.233.