“Meanwhile the warrener pushed for that desolate elevation known as Devil’s Tor, gaining which he sat down with his face to the south and rested a while. The spot was singular, and the hill itself crowned with no irregular peaks and turrets of shattered stone like its neighbours. Instead, masses of flat granite covered it, like the dome of some huge bald skull thrust upwards through the earth.”
Eden Phillpotts, 1902, The River, p.44.

Sat at an elevation of 554 metres sits the ominously named Devil’s Tor which as seen above Phillpotts describes most admirably. One would expect with such a name there is a host of demonic tales attached to it but search as you might you won’t find one in the annals of Dartmoor legends. But someone must have christened the tor with its name and maybe one can turn to ‘Crossing’s Guide to Dartmoor’ book for an explanation. He noted that; “Although it bears a name suggestive of some tradition I have never been able to gather any in connection with it. It was the opinion of one moorman whom I consulted that the pillar represented the Devil, and the tor which can hardly be truly regarded as such, “was plenty good enough vur he.”.” – William Crossing, 1990, p.119. The ‘pillar’ Crossing refers to is Beardown Man, a prehistoric menhir which stands sentinel close by. Could it be that  God fearing folk in later years regarded the menhir as a pagan symbol and attached a sinister association with the Devil to it? In which case the name was transferred to the only natural landscape feature in the vicinity, namely the tor. Having said that, over the years the ‘Diabolical One’ has actually appeared many times around the tor in the guise of various letterbox stamps. As always with Dartmoor salvation for the tor is at hand for despite its demonic connotations there are some magnificent views to be seen from it. On a clear day when looking northwards the view stretches over to Cut Hill, Fur Tor, Hangingstone Hill and Amicombe. If you clamber onto the platform of the tor one can just make out the tops of Great Links Tor and Hare Tor. In times gone by the tor often provided and escape route for the wily old Dartmoor foxes. If one reads the numerous accounts of hunt field days they often tell of foxes being put up in either Wistman’s Wood or the Beardown Plantation and then making for Beardown Tors and then doing a crafty ‘U’ turn up to Devil’s Tor, often dividing and confusing the pack and followers. One such chase in the February of 1926 went as follows; “After working along White Ridge the hounds picked up a line on the top of Assycombe Hill and swinging down onto the ridge settled down to race over it, crossed the East Dart on to Broadamarsh, and thereafter were lost to sight,m but the hunt staff. proceeding to Devil’s Tor, last heard them running to Walkham Head, and efforts to pick up the bulk of the pack were unrewarded up to dusk, and at six o’ clock the Warren Inn was reached on the homeward journey with five and a half couple of hounds, and ten couple away in the bogs. 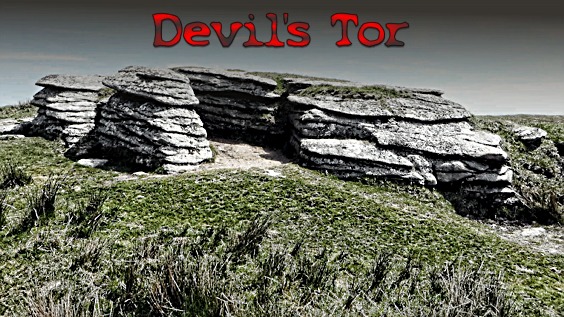 Thanks to Keith Ryan (DartmoorCAM) for his permission to use this photograph.

So apart from its evocative name what else can be said about Devil’s Tor? In short very little, its located and has been actually named on most Ordnance Survey maps since at least the early 1900s. The tor can be found at OS grid reference SX 5967 7963 and is best described as being a lamellar outcrop of granite with a small area of clitter accompanied with some smaller outcrops to the south. With the fairly recent craze of hill/tor bagging this small granite pile has earned various numbers in several lists, for example UKHillwalking lists it at number 26.

There is an interesting observation made by Mr. Hansford Worth which applies to Dartmoor in general and Devil’s Tor in particular.  He stated that the heavier levels of rainfall tends to occur on the lee sides of hills. These levels increase and become heaviest on the lee side of the first hills above 426 metres in a particular range. To illustrate this point he took a series of measurements from a rough line of weather stations extending 26 kilometres from Drake’s Place in Plymouth to Devil’s Tor. At Drake’s Place the rainfall was recorded as being 97 centimetres whilst Devil’s Tor recorded 135 centimetres. Therefore it was logical to place a rain gauge on Devil’s Tor from which regular reading could be taken. At one time there were regular reports appearing in the local press and issues of the Devonshire Association Transactions of the data collected from various rain gauges located around Dartmoor. In 1908 it was recorded that the previously quarterly readings were to become monthly readings and were taken by  F. W. Lillicrap. By 1917 this onerous duty became the responsibility of  Mr. Frank Howarth who in the February of that month reported that the gauge was snowed up. There can be no question that this location is one of the more exposed hills on Dartmoor and subject to its weather. For example on the 30th of November 1932 it was recorded that 6 inches (15.24cm) fell at Cranmere Pool which is no surprise. However Mr. Howarth recorded that 5. 65 inches (14.35 cm) fell on Devil’s Tor, a worthy contender for that day.

The tor even found itself appearing in the realms of science fiction with a seminal book written by David Lindsay and published in 1932 called simply’Devil’s Tor’. “The story describes the experiences and mental processes of various people drawn by an active Fate to Devil’s Tor, a minor Dartmoor height. Lives are transformed, shattered and ended by forces that can remake stars and galaxies.” Personally I have never read the book but it’s still available at the astronomic price of around £40.