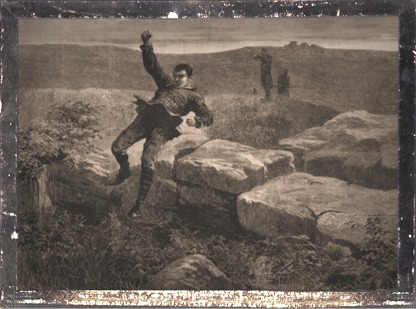 I walked slowly down the street in which my home was. Suddenly my heart gave a jump, a mist crossed my sight, and I hardly had strength left to creep into a shop and drop on a chair. Opposite my house two men in plain clothes paced up and down, and one of them I recognised as a Dartmoor warder, who must have come up by the night mail. In truth I was nearly frightened to death, for if recaptured I should be flogged and obliged to go my whole term of imprisonment.
I at once left the place and went to an adjoining town where Ned Chambers and his father had a large factory. As I walked into their counting-house, Ned, who stood with his back to the fire, looked at me for a minute puzzled. “Oh Mr. – Mr. Boyle, how are you?” he said, with a glance at an elder man, who sat behind a newspaper. “Just step in here for a minute.”
To cut the matter short, there was a vacant clerkship in the establishment, which  Ned, who never doubted my innocence, gave me, and I am now the principal cashier, with hope of a partnership.
Where is the moral of the tale one may ask? There is one, unfortunately for my peace of mind. The newspapers, in relating my escape, said I was traced to Cranmere Pool, where I was certainly drowned, but that this report was circulated for the benefit of those who might be tempted to follow my example was proved by the fact that my wife was haunted by detectives. Mine was the only successful escape ever made from Dartmoor, and I knew that the authorities would move heaven and earth to find me.
With Ned Chambers’ aid my wife and I met two or three times, but she was so closely watched that we feared to continue it. I became by degrees intensely nervous, made two or three efforts to leave the country – once by Plymouth, and again by Queenstown – but each time found, or fancied I found, a detective’s keen eyes upon me, and I sacrificed my passage-money in both cases rather than undergo the scrutiny any longer.
I live under an assumed name and am practically separated from my wife (who wears widow’s weeds) and my children. Friends are always chaffing me about my ‘hunted’ look, and with reason, for if I come suddenly upon anybody I fancy I see one of my former gaolers; the glance of a policeman terrifies me. Even at night am I pursued by dreams of being dragged back to Dartmoor, again clad in its hateful livery, and shrinking as the whip whistles over my naked body. The passing years have rather intensified than diminished this feeling. My nerves are shattered, my health broken, and I look twenty years older than I am.” – The Bideford Weekly Gazette, March 10th, 1891.