For centuries the folk from Dartmoor have been told grisly tales of the ‘Wisht Hounds’ who with their master stalk the lonely moors at night. Some will say ’tis the Devil ‘imself who leads them while others assert that it’s Squire Cabell. Then there are those who will tell that the master of the hounds is none other than Sir Walter Raleigh. But regardless who rides with the Wisht Hounds they are something that you don’t want to meet on a dark and misty night.  They search the moors in order to feast on the souls of lost folk and unbaptised infants just like the poor moorman who met the ‘The Dark Huntsman‘. But not everyone who meets the Wisht Hounds has a tale of woe to tell as this story clearly demonstrates:

There was once a poor widow woman who lived on a small farmstead in the heart of the moor. Life was harsh for the old woman who managed to scrape a meagre existence by selling her eggs, cheese and butter at the local market. Unfortunately her hens were no longer spring chickens and her four cows were no longer high yielding cash cows.  Every week the old woman struggled to find enough eggs and make enough butter and cheese to sell.  For her to get the best prices for what little produce she had it was vital to get to the market at first light in order to get a prime pitch for her wares. So with the moon still high in the night sky she hauled her aged pony from the shippen and loaded on its panniers in which she carefully placed her eggs, cheese and butter.

As the old lady made her way along the ancient moorland track she faintly heard the baying of dogs wafting on the breeze and to her aged ears it sounded as if they were coming at pace towards her. Then as if in the moon’s spotlight a small brown hare came bolting along the track and on seeing the old woman immediately ground to a halt. By then the dark figures of a rider and a pack of enormous hounds hounds in full cry could be seen. As quick as you like the old woman scooped up the hare and hid it deep down in one of the panniers and trundle on her way to market. She had not gone far when she firstly spotted a huge headless horse bearing down on her. Then she noticed the goat-like horns and cloven feet of its rider along with the pack of huge black dogs, their eyes flaming like the pits of hell. Immediately she knew she had just met the Lord of Darkness himself and his pack of Wisht Hounds, an icy arctic shiver shot up her back. The very air was thick with the stench of sulphur and the fetid stink of the slavering breath of the hounds. The headless horse slid to a stop right beside her then much to her amazement the rider asked in a very polite voice if she had recently seen a hare pass by. The gentleness of his voice gave her heart and she firmly stated that she had not seen any creature since leaving home. The rider nodded graciously, spurred the headless horse and called his hounds then master and pack charged off into the dark night. 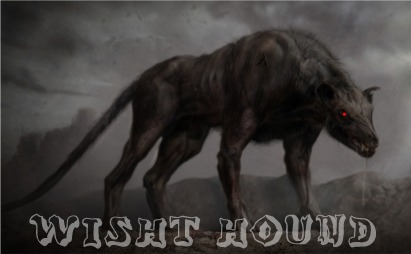 No sooner had the hounds disappeared from sight than the little hare sprung from the pannier at sat at her feet. Slowly it began to spin and spin around until the animal became just a furry blur and then a beautiful woman emerged like a butterfly breaking out of its chrysalis. The lady took the old woman’s hand and gazing into her eyes said; “Good dame, I admire your bravery in the face of such Demonic company and I thank you for delivering me from a state of suffering that should not be uttered into human ears.” Smiling sweetly the lady continued; “fear not when I tell you that I am no longer a dweller of this earth. But during the time that I lived amongst you humans I committed a grievous crime and as punishment I was turned into a hare and doomed to be relentlessly chased by the Devil and his hellish pack of hounds. Only when I could get behind the hunt would it be possible to return to my original form. Now thanks to your bravery I have finally, after countless centuries returned. As a reward for your kindness you will find that from this day hence your hens will lay all the eggs you could wish for and you cows will yield so much milk you shall never want for anything.” Then the lady’s face took on a serious look; “but I must warn you of one thing, you have now cleverly outwitted the Dark Lord and should he ever realise what you have done all manner of ills will befall you.  Please bear in mind he can assume all shapes apart from the lamb (Christ) and the dove (the Holy Ghost) and so it is to these that you must always put your trust and then they will protect you from all evils.” With that the lady simply vanished into the distance amid the first glowing rays of the rising sun. As promised from that day on her hens became prolific layers and milk from her cows ran in endless streams and she wanted for nothing.