Ever since early visitors began exploring Dartmoor they have done so in a variety of ways. Some on foot, others by charabanc tours, a few with a private Dartmoor guide such as James Perrott whilst occasionally there were those who hired a donkey cart. Now follows and account of four people who decided to venture onto the Moor in such a conveyance back in 1882:

“On a sunshiny afternoon, we – who “were four” – set out from a farmhouse in a picturesque village close by Dartmoor to spend a few hours on the moor near at hand. Two of our party clambered into a little donkey cart, which was equipage most easily obtained, and suitable for our purpose on this occasion, and the others walked; the provisions for the modest picnic we intended to have, being packed in a basket in the cart, while shawls, umbrellas, and comfortable cushions were also taken with us. We all proceeded along and up the lanes leading to the moor, lanes in whose banks bright red-brown oak leaves were glowing out, amid many kinds of ferns, and a profusion of flowers. The small stones were in places in the lanes almost as plentiful as the ferns, as the riders found to their discomfort. But the rough places having been jolted over, and succeeded by a spell of smooth road, the pure air, the beauty of the flowers and foliage, the sounds of birds, and of waving branches, and once a tiny brook, and the deep blue of the sky, were all enjoyed at ease as the donkey walked slowly on – very slowly, for none of the party were inclined to beat him vigorously, or were capable of uttering correctly the “Go aan” with which his proprietor would have braced him up to greater exertions, if present; and lacking these customary stimulants his pace was far from being rapid. But, at last, after gentle pokes with a stick, being led in the way he should go by one person, and being assisted in pursuing that way by the car being pushed behind by another, the top of the steep hill was reached, and then the cart went smoothly over the soft turf of the moor – except when the donkey insisted on taking it over hillocks, or across ruts – amongst gorse brushes, whose blossoms scented the breeze which hurried to greet us. In the distance were the higher hills of the moor, bare and wild, with shadows falling across them, one tor with a small chapel on its summit, standing boldly above the rest. Nearer were lower hills, some with patches of gorse on them, some with trees, and one with a cultivated and commonplace green field lying across it, reclaimed from the moor. We soon came to the brow of our hill and began to descend amid ferns, gorse, and stones protruding from the soil, and reaching a heap of granite rocks overhanging a winding river, the occupants of the cart alighted, leaving the donkey to crop furze and ferns to his heart’s content, and we all enjoyed the prospect and the air. A wooded height rose from the river, just opposite to us, the brawling sound of the water reached us, we watched a heron, still, but busy in the midst of the stream, as we rested far above it on the hill. On the right, where the moor on our side of the water jutted out, causing the river to bend, parts of some buildings were seen (which denoted the existence of a mine there), and the smoke rising from a cottage; and to the left, at the end of the valley were other buildings, and we could see the top of a gigantic wheel which was revolving slowly among trees. We heard the cuckoo from the wood on the hill to the left, on our side of the river, the trees of which wood, not being in full leaf, showed every shade of green, besides a reddish-brown, in their foliage, each colour being intensified in the bright sunlight. Our heap of rocks had ferns in its crevices, and tiny leaved ivy spreading over it, and by it we stayed for sometime, drinking in the invigorating air, and getting the lovely picture that we saw before us, painted on our memories, to be looked at in years to come, when perhaps so bright and peaceful scene, and one views with friends, may give comfort and pleasure on dull and cloudy or stormy days. 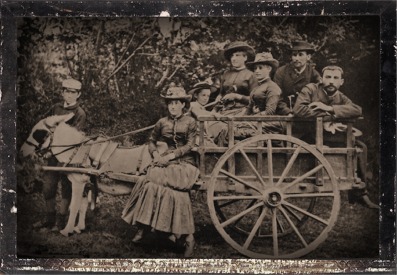 Presently the Dartmoor air made us hungry and thirsty. The spirit lamp was lighted in the cart, the bottle of water, cocoa, milk &c., produced, cocoa was made, mugs given out, our solitary spoon, the sugar, and the edibles handed round, and the picnic proceeded. Afternoon cocoa over, we set out for a different part of the moor, where from a higher heap of rocks a more extended view was to be gained. Many pale blue, and bleached violets grew among the slippery turf, and in a thicket that we passed we saw a holly bush in flower. From the rocks we saw several low hills, with a strip of pale reddish moorland appearing above them in one direction; to the left were moors, a white cloud descending and half veiling one of the bare hills, and purple-grey shadows lying on several of them, while to the right beyond and above green hills Mount Edgecombe – blue in the distance – was plainly visible. We looked, enjoyed, and laid by another picture for future days, and then – for time was passing rapidly – descended from the high stones, reached the cart, and proceeded towards home, past some ruined buildings, through a lane, where we found a fine dark blue columbine growing, and the first foxgloves out in flower that we had seen this year.  These flowers we gathered; and some dark, and some paler-hued bluebells, and ivy with pointed leaves, and ferns with curled brown fronds – passing over on this occasion the humbler campions and stellarias. Then we went on through a farmyard (whence we could see a honeysuckle in full bloom, over a porch) down a steep portion of the way, where we saw pale primroses and other wild flowers in abundance in the banks on both sides, to a part of the lane where springs trickled down into grey mossy troughs, out of which the cattle drink; past these troughs and on to our farm (where ferns spring from every crack in the garden wall), then along the pathway with its laurel hedge, under some trees, to the house, in front of which there are cypresses and yews, (one of the latter having a rose bush climbing over it) standing on a small lawn. On the lawn are rough but comfortable seats, from which an orchard, green fields, and a farm, can be seen. The windows of “our” farmhouse command a view of the little village built on the slope of a low hill, with church tower appearing at one side amid fine trees. The donkey stopped, the occupants of the cart descended, the roomy old house was entered and the pleasant afternoon on the moor had come to an end – a happy time never to be forgotten.” – The North Devon Journal, June 15th, 1882.

I would imagine that hiring a donkey and cart of which you have very little experience would be the modern day equivalent of hiring a car that is utterly unfamiliar with a host of gadgets and gizmos? Sadly it’s no longer possible to hire a donkey cart anywhere on or around Dartmoor but maybe it would be an idea for a business opportunity? I must say such a day would certainly be a novel experience especially where a stubborn donkey was concerned Unfortunately it’s hard to determine what part of Dartmoor this particular adventure took place the only clue being that they could see Mount Edgecombe which would suggest somewhere on the South Moor – possibly around the Sheepstor area?