Following the cessation of the Napoleonic Wars in 1815 many ex-servicemen found themselves homeless, out of work and penniless with no option but to tramp the country looking for employment, sleeping rough and begging. So great were the number of tramps and beggars that in 1824 the Vagrancy Act was passed which made it a criminal offence to be found begging or be sleeping rough. Anyone caught doing so usually ended up doing time with hard labour in one of the country’s infamous jails.
Whilst on the subject of infamous jails there was probably one of the most feared to be found at Princetown – namely Dartmoor Prison. I suppose quite understandably, so dire were the conditions that many of the convicts made escape attempts, most of which ended up with them being recaptured and handed a harsh punishment for their troubles. When a convict was at large in the bleak wastes of the moor every attempt was made to find him and return him back to prison. In order to achieve this huge man hunts would be mounted with warders, policemen and local moormen scouring over stream and tor. Should any moor-dweller successfully recapture an escapee he could claim a reward from the prison authority, such a person in prison parlance was know as a ‘Bog Trotters’ 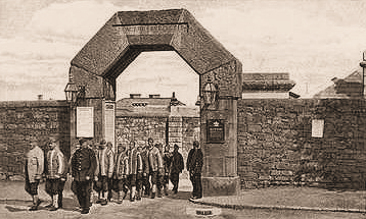 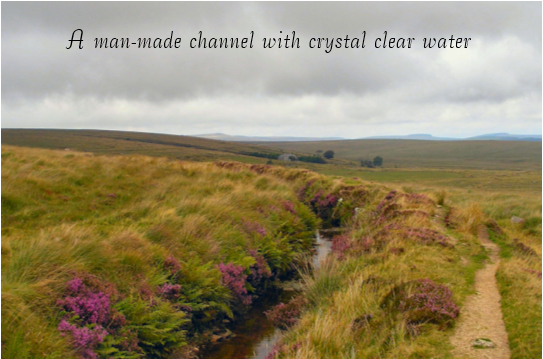 Once again the two men were back on the open moor and had decided to get off it as quickly as possible before they met anymore ‘Bog Trotters’. Before long they came upon heaps of stones piled up and what seemed like rotting wooden structures. They soon realised these were the remains of some old mine workings such as they had seen when tramping across Cornwall. It was about this point when a sudden chill floated across the waste which was closely followed by rolling clouds of opaque mist. Before long they were enveloped in a dense shroud of a grey miasma which took the visibility down to a mere few feet. Ruben was just saying to Jeremiah that maybe they should hunker down  until the fog lifted when there was a loud crack followed by a pitiful scream. Looking around to see what had happened Ruben was astounded to see that there was no sign of his mate anywhere. He took a few steps backwards and heard some muffled moans coming from deep down in the ground. Then he spotted a yawning hole and once again heard the sound of cursing coming from deep inside it. Even stranger was the fact that he could distinctly make out two voices emanating from the dark chasm. Carefully he laid himself down on the edge of what could only be an old mine shaft and peered in. There he saw Jeremiah laying on top of another body which seemed to be wearing the unmistakable stripes and broad arrow clothing of a convict.
Having safely extracted both men from their fusty old dungeon Ruben could plainly see that this escaped convict was in  no fit shape. He clearly was exhausted, starving and cold so Ruben took off his old army great coat, dug out the remains of the bread and cheese and sat the poor wretch down on a nearby heather clump. Eagerly the convict gulped down the bread and cheese and wrapped the coat tighter around his shoulders. Joe Cross, for that was the convicts name, began to tell of his plight. He was working on a convict gang draining some bog land when a dense mist came down. He and another ‘lag’ took the opportunity to disappear and make a bid for freedom, the guards soon noticed their escape attempt and began firing volley after volley at them.  Luckily Joe Cross managed to dodge the flying shots and made his way out onto the moor. Slowly shaking his head, the convict explained; “The minute the big bell of the prison rings, and the flag is hoisted to let everyone know a convict has escaped, there’s a score or two of them peat-cutters leave their work and are after the poor devils, the five quid being more’n they can earn in a couple of months.” He then gave a big sigh and put his head in his hands; ” We can’t get far in this fog but when it lifts you two may as well take me in and get the fiver rather than the Bog Trotters as I can’t last out here any longer.” With that he fell asleep. Ruben and Jeremiah quietly discussed what should they do. Both being old lags it went against their principles to turn the escapee in but on the other hand if he was saying he couldn’t make a decent bid for freedom then five pounds was a lot of money to them. As the mist was showing no signs of lifting and night was approaching fast the two old soldiers decided to batten down the hatches for the night and make their minds up with what to do with poor old Joe come daybreak. After a cold damp night spent out on the moor daybreak came and they soon saw that the question of the escaped convict and what to do with him had been answered – he had vanished into oblivion.  In one way they were quite relieved as to turn in a fellow lag was just not done but that five pounds would have been more than welcome and bought a feast of bread and cheese.
What became of Joe Cross nobody knows, was he recaptured, did he make his bid for freedom or just perish somewhere on the unforgiving Moor? As to Ruben and Jeremiah they finally reached Moretonhampstead only to find there was no promised Shangri-La for tramps and so they carried on tramping the highways and byways of old England. However, no matter where they roamed the two made a conscious effort to steer clear of Dartmoor and the ‘Bog Trotters.”