It has long been said that once a year the river Dart demands a human life and when it is ready for ‘a heart’ it will ‘cry’ out and summon its victim. The sound of the river can usually be heard near the ‘Broad Stone’ or Brad Stones. An old saying goes: “Dart, Dart, cruel Dart, every year thou claim’st a heart.” Eden Phillpotts told the story in a very evocative poem:

Maid o’ mine, little maid, by the brink of the

The river so golden, so gay and so free –

Where halcyon gleams, where the meadowsweets

And bend to the weight of the murmuring bee.

There’s more than your bonny grey eyes and fair

For dimly reflected, within her tresses,

Your soul is revealed in the soul of the stream.

Year in, year out, the River of Dart

Is lovely as thou, little maid of my heart.

Maid of mine, little maid, hidden deep in her

The river, so frank and so laughing of face,

Each year a man dies in her silver embrace.

Be sure a dark spirit is restlessly roaming

Unseen in the depths where the currents unroll.

She watches and waits for a sad winter gloaming,

Then snatches dear life from some night-foundered

Year in, year out, the River of Dart

Is cruel as thou, little maid of my heart.

Obviously the river Dart is where Dartmoor gets its name. The actual place name is first recorded in 1162-5 as Derte and over time has changed to Derta(m), Derthe, Dertan and finally appeared as Dart on Saxton’s map of 1577. Gover, Stenton and Mawer, 1992, p.4, suggest that the root is a “British word meaning ‘oak,’ hence ‘oak grown stream’.” The Dart could be considered as three rivers; the West Dart, East Dart and Double Dart.

The West Dart river rises at 1,780ft (542.5m) near Flat tor, and its  moorland course is approximately 11.6 (18.6km) miles in length. During its moorland journey it receives 15 tributaries and cascades over 5 granite waterfalls.

The source of the East Dart is in the Northern Fen close to Whitehorse Hill at an elevation of 1,820ft (554.7m), the moorland course is about 11.2 miles (18.02km). The East Dart can only claim 10 tributaries but like the West Dart has 5 waterfalls of which ‘The Waterfall’ near Broadun is probably one of the most spectacular, especially when the river is in full spate or frozen. The distance between the two river sources is roughly 2.3 miles (3.7km) as the crow flies.

The map below shows the moorland journey of the river down to where it becomes the Double Dart. As can be seen from the map there are only 5 major rivers that span its waters. 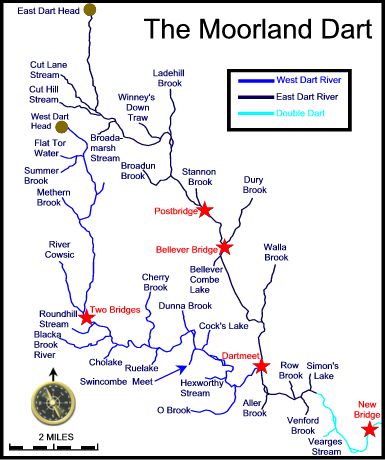 The two rivers then converge at the confluence called ‘Dartmeet‘ at a height of 700ft (213m). This has got to be one of the most popular of the tourist ‘honeyspots’ as a visit on a warm summer’s day will testify.

The river flows on down to just under Mel tor and the deep gorge, here it then becomes the Double Dart and runs a course through the border country for around 4.4 miles (7km).

The Dart Gorge and the Double Dart.

The map below shows the course of the river through the border country of the moor. Again here there are only three bridges that cross the Dart before it leaves the National Park Boundary. 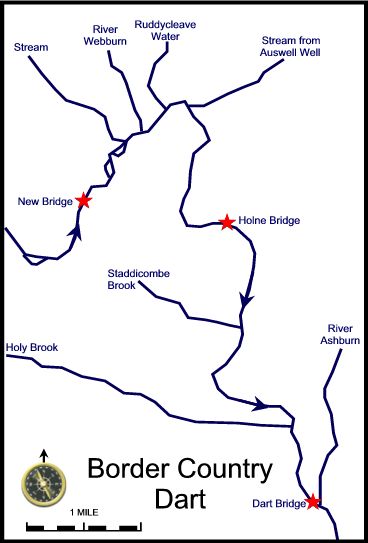 It then becomes the river Dart and flows down to the sea 18½ miles (29.7km) away at Dartmouth. During the time the waters become the Double Dart and flows on to the Dart it has gained another 7 tributaries and fallen over a further 4 waterfalls before leaving the National Park boundary. From moor to sea the river’s total combined course is 46 miles (74km) in length which makes the Dart the longest of Dartmoor’s rivers.

Having met the river perhaps it would be as well to examine how the legend came about. It is true that the river Dart does ‘cry’, just go and sit up on Bench tor when there is a north-westerly wind blowing and you will hear the eerie booming sound coming from the gorge below. But where did the ideas that a) the river needs an annual sacrifice and b) it being associated with a naturally occurring phenomena? I would suggest that one needs to look way back into pagan beliefs to find the answer. There are many universal water spirits, the Greeks believed that waters over which Naiads presided were endowed with inspirational, medicinal, or prophetic powers. Thus the Naiads were frequently worshipped by the ancient Greeks in association with divinities of fertility and growth. There is a whole host of Celtic/Romano water deities such as Coventina, Sabrina, Sulis, Juturna, Clota, Diva and Arnemetia. Most major rivers had their own goddesses and so why not one for the Dart? If this was the case then it is not a huge step before coincidence and misfortune come together to give a legend. If you have fast flowing water it is only a matter of time before somebody drowns in it, to this day people are still drowning in the river Dart. If the tragic death coincides with an upturn in fortune then just possibly in less enlightened times, it may have been assumed that the river deity was rewarding the people for a life. If this happened twice then a pattern forms. Combine this with another coincidence in so much as if any death occurs at the same time or before the wind causes the river to ‘cry’ then it would not take long to form that particular association. Once that has been done the ‘crying’ of the river has become an omen for a drowning. It would be morbidly interesting to correlate the dates of every death in the river Dart with prevailing weather factors that could have cause the river to ‘cry’.

It is also interesting to note that of all the Dartmoor rivers the Dart is the only one with this kind of legend attached to it.