There can be no question that not so very long ago the belief in the powers of witchcraft was very strong and deep routed on Dartmoor. When it came to the local ‘Wise Woman’ her wisdom and powers were never put into question. She could cure many an illness and break any spell that the dark powers had cast over suffering individuals. What follows is an account of a local magistrates hearing related in 1868. This clearly demonstrates how the stolid belief in a wise woman’s words were upheld even to the point of having seemingly two innocent men charged with a minor crime  on the finding of her ‘mystical powers’.

“I sat with a bench of Magistrates in one of the Moorland towns some years ago and will now describe the scene of which I was eyewitness. Some music books had been stolen from the rood-loft of a village church. There are two corporate bodies in most of our rural churches who intensify the ambitions of rustics, and who are constantly in a state of rivalry with neighbouring parishes – that is to say, the bell-ringers and the choristers. To carry away the palm of victory in a bell ringing contest is a pride and a glory to the conquerors; and to be famed for having the best “moozic to be yerd var or near,” is the boast not only of the vigorous actors, but of the admiring auditors who form the congregation. The crowd (violin), the base (viol), and the vlut (flute), each safely kept by the possessor at whoam, and brought out on Zundays for the serviss of God, are the leading instruments by which the choir is led. They are played with an energy which shows that heart and hand, breath and body are strained to the utmost in order to awaken the loudest, if not sweetest, harmony. The tune books, into which no novelty has intruded for a generation, are dear to these people as the apple of their eyes, and sacred as the Bible itself. The loft is the popular throne, and its belongings are in the special keeping of the choristers. One Sunday  morning the books had disappeared and great was the consternation of bass, tenor and treble. A couple of weeks had passed, and two good-looking young men were brought before the magistrates and accused of the theft. There was a considerable assembly in the court, and every look hurled condemnation on the prisoners – that they were guilty was a foregone conclusion – the people had come not to hear the evidence, but to witness the punishment, for what was alike a sin and a sacrilege. The wrong done was not personal but public – the crime was committed against the whole community – and the whole community came to “zee the vellars” properly denounced. There were excited colloquies among the rustics – “They zay they didn’t doo’t. What du uz care vur that? Us knaws better o’ the bench. They be nicked naow, an ‘ell get a praper lerriking, Us knaw ‘ow they bediddled away the buiks. Crimminy! They maun stump to Lob’s pound vust, and arter draggle to Bot’ny Bay.”
The Chairman shouted “Silence!” The prejudged culprits stood before the bench watched by a couple of constables, as if they might possibly escape by the roof, or fly out through the window. The crowd pressed forward, as if determined not to lose a word. The word of “Silence!” again falling from the bench, was repeated by the clerk, then by the constables, then passed on from one to another of the authorities, and dying away upon the lips of an old woman who was seated on a distant settle, the awful march of justices’ justice began.

“Who is to prove that the books were in the loft?”
“Me! me“” answered a rustic, pushing forward, in the competition for the honour of laying the foundation upon which all the proofs of guilt were to be raised.
“Thomas Towler! – the evidence – you’ve got the Testament in your left hand instead of your right,” – so the book is transferred, and eagerly kissed, “wait a minute, the evidence you shall give,” etc. etc., the book is kissed again with all the proper formalities.
“When did you last see the music books in question?”
“I zeed ‘en last Zaturday be a vortnight.”
“Where?”
“I zeed’en in the rood loft – an’ Ben Bailey, – and Michael Mimberry, an’ more on uz zeed’en tu.”
“Now just answer the question, and let other people answer for themselves.”
“Ess’ yer Worship – but all on us zeed’em, and used ‘en thickey day, and I mind the tuens uz zinged, an I’ll tell ‘ee how I mind ’em.”
“We don’t care about that! but when did you miss the books?”
“Last Zunday. When me and Michael got to the tap of the stairs, the cubbard were open and the buiks wasn’t there, an’ there were zome of the leaves upon the vloor. I knaw’d em by the dog’s eres. Warn’t et zo Michael?”
“Now pray stop – and only answer what you are asked. Was leave ever given to take away the books? Were they ever lent to anybody?”
“Naw, niver, niver as I knaw’d – naw, I be zartin zure – niver, niver.”
“And have the books been since found?”
“Naw! uz ha’ zearched indoor an’ outdoor, vrom hour t’ hour, but they han’t bin vound.”
And Michael stepped forward, which was by no means needed, to confirm the important statement which Thomas had made; and having done this he bravely and without any sort of reservation, discharged an important social duty.
“But how are the prisoners concerned? Have the books been traced to them?”
“Oh, they be they! there’s no doubt o’ that!” said a well-dressed, sober-looking person, who was obviously an authority, and who was discovered to be the Church Warden of the parish, which had been deprived of its music literature.
“Come forward sir!” said the magistrates, “and tell us what you know about this matter.”
“Ees! – they be they! they be the thieves!” repeated the excited Church Warden, before the swearing book was placed in his n=hands. “I knaws they be they!”
And having been sworn, the chairman of the Magistrates quietly said, “These men have been taken upon your affidavit. Inform the Bench of the reason of their being brought before us.”
“Becuz I knaws I be zartin zure they be the men!”
“Why? – how?”
The Churchwarden seemed somewhat perplexed; but looking around, found some encouragement in making a clean breast of it, and at last said very quickly, “Well, you shall knaw – ’twas the wise woman telled me.”
“The wise woman! And who is she?”
Upon which the Churchwarden’s tongue being loosened described the wise woman as a most worthy and respectable person, of whom he had thorough knowledge, and so had his neighbours: a murmur of applause and approval was heard in the room, confirming his statement, and thus encouraged he went on to say that sometime ago he had lost a silver coffee–pot, and went to consult the wise woman, and she told him she knew who had stolen it, and would make the thief restore it, and it was restored; and he again vouched for the honesty of the wise woman; but nobody was found present who could in any way connect the accused man with the robbery of the books.
So a summons was issued, and the wise woman was soon after brought by a constable into the presence of the worshipful bench. I was somewhat anxious to observe the personal appearance and demeanour of one who exerted so extraordinary an influence over the peasantry. She was thoroughly self-possessed, came forward without the slightest embarrassment or hesitation. She was neatly and becomingly dressed in black, of middle age, of a mild and even attractive countenance and very readily took the oath.
“Are you acquainted with the prisoners?”
“That be they!”
“They what?”
“They that stealed the buiks.”
“How do you know that?”
“Why I dealed the cards, an’ they told I that the men’s names were W. H. and A. V., an’ I didn’t zay no more than that, and now zay that if their names be W. H. and A. V., they be the men.”
The names of the accused were William Harris and Ambrose Vickery. Further evidence there was none; the case was dismissed, and the wise woman was placed at the bar which the unconvicted prisoners had just occupied. She was informed that she would not be allowed to continue her practices; that if she persisted in deluding the people she would be punished as a cheat, a rogue, and a vagabond. She listened but the menace did not seem to affect her.
“Do wi’ me what yer will, they be the men!”
No further proceedings took place; but many looks of sympathy, words of kindness, and friendly greetings, accompanied the wise woman when she left the justice room. 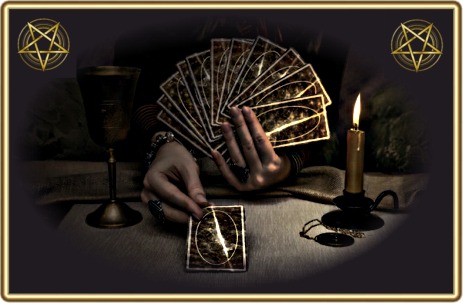