Here is a story about how Mrs Brown won the brush with the Dartmoor hounds. I will let her tell the story in her own inimitable way:

“One day last week I says to Josiah, “If you’m goin’ down to Buckfastleigh – I knowed as he was goin’ down for Josiah most in general goes down once of a day and calls at the King’s Arms just to ask the time ‘o day, a passin’ by the Post Office clock a starin’ of him in the face free of expense.” I says, “if you’m goin’ down, would you call at Dr. Ubsdale and ask him to look in as he goes up along to Brent, for I’m feelin’ that faint and sinkin’ I do believe as I’m sinkin’ for the influenza.”

“If you’m feelin’ that bad o’ the inside, Maria,” he says, “why don’t you take a glass o’ somethin’ hot, which is better and cheaper than doctor’s medicine?” For Josiah is allus o’ the opinion that a drap o’ spirits taken inside or out is a cure for most anything from a bunion to rheumatics, or a corn to a cancer as the sayin’ is – Howsomever Josiah did call and doctor was up along pretty smart.

Now most in general when I’m a bit ailin’ like, he says,

“Mrs Brown, you’m sufferin’ from a slight estrangement o’ the liver.” But this time he says,

“My good woman, all you want is air and exercise: you’ve been too much in the house – The best medicine for you is ozone which can be had in perfect purity on the moor. I must persuade your husband to take you there so that you can get a good draught of it.”

“Thank you,” I says, “Dr. Ubsdale, and I’d best take a couple of black-baskets for to pick it in.” For I thought twas some herb or plant as grew on the moor.

“Oh,” says he, “Nature’s basket will be quite enough, you must inhale it – fill your lungs with it.”

Well, he spoke to Josiah and t’was settled us was to go on the moor next day; and very busy us was all the afternoon making preparations for it –

Josiah he says, “You can’t pick enough ozone on wheels, you’d better ride Bob,” (that’s our old trap horse) “and I’ll trim him up a bit and make a proper lady’s pad of him, and you can be lookin’ out somethin’ fit to ride in.”

So I looks out an old blue skirt as I used to ride in years agone when I was a bit slimmer than I be now, and puts a new waistband in ‘un about a foot longer, and then unbeknown to Josiah, I takes a pair of his best blacks what he keeps for weddins’ and funerals and such like, and next day there us was all ready for a start.

And pretty capers, I tell ‘e us did have afore us did start – There was Bob a champin’ of his bit and tryin’ to look like a park hack – What a job I had to be sure to get on top o’ him!

Josiah, he says, “Maria, you’m a got that heavy o’ late years as would ‘most break a man’s back to heft you up; do you think as you could let yourself down on to him from the kitchen winder?”

“When you was a little boy to school, “I says, “no doubt you read of a king who walked out of a winder to his death; I ain’t a goin’ to foller his example.” So I gets a kitchen chair and an empty cider cask, and Bob was led alongside – But just as I was climmin’ up, the horse and the chair and the cider cask was all of a tremble and I should have been a corpse at my own door if I hadn’t had the luck to fall on Josiah and knock most all the breath out of his body. Josiah was that aggravatin’ and ill-tempered a scrapin’ the mud of hisself, so I says,

“You need’nt take on so; there’s allus somethin’ to be thankful for, your coat have a saved my ridin’ habit and you haven’t got no bones broke.” But there! I do say, “as chairs and cider casks aint no sort’ o use for mountin’ blocks, they’m too rickety!” So I fetches out the kitchen table as is more solid like and clims up on that and there us was started at last.

We was got out to Smallbrook Plain as Josiah called it, and was eatin’ our bit o’ lunch comfortable like, when Josiah says,

“Maria, I can hear the hounds and I do believe as they’m comin’ our way; I’d best hold old Bob, for he belonged to a sportin’ parson once, and he’s tarrible fond on ’em.”

Sue enough, in a few minutes they comed a yowlin’ and jowlin’ and makin’ a most tremenjous row. ‘Twas as much as Josiah could do to hold Bob, he was that there prancin’ and excited, and there was I a bobbin’ up and down like a parched pea in a fryin’ pan. Well, after a bit they all passed on, and Bob was quieted down again, so Josiah leaves go o’ him to get on his own pony, when all of a suddint the wind brought the sound o’ them dratted hounds to Bob’s ears, and next moment there he was a tearin’ like a mad thing over turf-ties and bogs and boulders for all the world like a Derby winner! and there was Josiah a hollerin’ for me to stop in languidge I am quite unable to repeat. 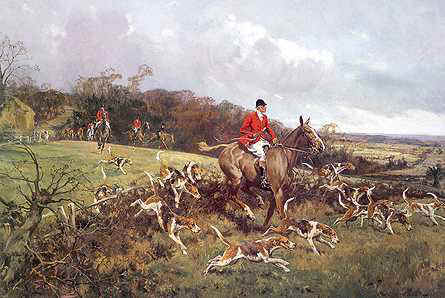 I reckon nobody got as much ozone as I did in quarter of an hour. It got into my head, it got into my Bob’s head. It tored off my hat, it tored every hairpin out of my long hair afore Bob catched up the hounds and I do believe as he’d a catched the fox hisself for he galloped right through them as proud as you ever seed.

“Mr dear Sir,” I says “if I hadn’t a bin holdin’ hard for the last quarter o’ an hour wherever should I have bin now?”

“Stap your hounds,” I hollered back, ” and my horse’ll stap hisself!” Sure enough in another moment if my words didn’t come true! for there they all was a tumblin’ over one another a snarlin’ and a guzzlin’ and a muzzlin’ and if that there Bob didn’t stap that suddint like as sent me all of a sprawl right over the ears of him into a green place as soft as a feather bed but not quite so dry! The more I struggled in that there bottomless pit o’ contemption the deeper I sank, and if Mr Coryton hisself hadn’t throwed me a stirrup iron and dragged me out as black as a kitchen kettle and as wet as a drowned rat I should have been buried there and then without benefit o’ clergy as the sayin’ is.

Then all the gentlemen came round me, congratulatin’ me on my ridin’ and offerin’ me something to keep out the cold out, and Mr Coryton presents me with the fox’s brush, for days he,

“You’m the only lady in at the death!”

“And very nearly in at my own death and burial,” says I, “Mr Coryton.”

After a bit Josiah comes up with my hat, and he says,

“Maria, I reckon you and Bob have had about enough ozone for one day, for you’m wet to the skin and Bob’s got twp of his shoes tored off – If there’s a man strong enough to heft you up we’d best be gettin’ home along.”

Some o’ they young army gents tried their best, but what with laughin’ and the wet and the mud they almost broke a blood vessel and never hoisted me a foot off the ground, so I walks to a rock and clims up myself and us started for home. I was that there cold and wet and tired I says to Josiah,

“What would I give for a good cup o’ tea! Do you know what time o’ day it is?” That put Josiah in mind o’ the King’s Arms for he pulls out o’ his pocket a flask o’ his medicine and gives me a dose, and I won’t what but it’s better than ozone when a body’s been up to his elbers in a Dartmoor bog.

Next day I sent off Josiah’s best blacks, which was a’most as many colours as a rainbow, to the Millbay Dyeing Works – and I do hope as none of his friends won’t want to be married nor buried afore they comes back again.”

“Squire Forth he purchased Cator Court, And hath remodelled all the place, With building of …