In the December of 1881 John Bray from Chudleigh, then aged 59, was arrested and charged with stealing  some horse hair along with other items from an outhouse at Bickington.  That same month he appeared at Ashburton Assizes charged charged with the offences and was  committed for trial at the Exeter Quarter Sessions. In the January of 1882 he duly appeared at the Quarter Sessions where he was found guilty and sentenced to five years penal servitude at Dartmoor Prison. It also transpired that Bray was something of an habitual offender with ‘sticky fingers’ as it was not his first conviction.

Very little is heard about John Bray during his initial years at Dartmoor Prison until the late July of 1884 when he exploded into the national press in a big way.  On the Monday morning of July the 22nd all the prisoners were lined up and Mr. Bray stepped forward and formally addressed one Captain Avery. He requested that he be allowed to “go mowing,” as this was a kind of work which he enjoyed. The request was denied and Bray was heard to say; “I will give him some trouble yet.”  At around four o’ clock that day when he was working in the prison gardens Dartmoor decided to envelop Princetown in one of its infamous dense fogs. Probably still taking umbrage at being refused his request to “Go mowing” Bray took this opportunity to escape and managed somehow to clamber over the prison walls. One of the warders, Walter Kelly, saw him make his escape and fired his rifle at the fleeing man but managed to miss him. Once over the wall  he made off across the prison fields in the direction of Two Bridges. Having missed his target Kelly immediately gave the alarm and within fifteen minutes all remaining prisoners were locked up and a posse of around fifty warders set off in pursue of the escapee.
Bear in mind that at this time Bray was sixty three years old and no spring chicken so one could consider that this escape was one of considerable desperation. Prisoner warders were sent in every direction with one party tracking Bray by the marks of the broad arrows that were embedded in his boots. They managed to follow his trail as far as Two Bridges where it went cold. At around nine o’clock that evening Bray had the misfortune of meeting young Mr. Tuckett from Dunnabridge Farm. I say unfortunate for two reasons – firstly Tuckett recognised him as an escaped prisoner (not hard to do when they’re still wearing prison garb), and secondly because Mr. Tuckett was a very accomplished wrestler. “where be ee gawn’ tu?” asked Tuckett, “to Chudleigh,” replied Bray, “if ee cum wi me I’ll shew ee the way,” obliging proffered Tuckett. The invitation was refused so Tuckett gave him no option, “we’ll ee be cummin’ wi I any road.” With that he grabbed hold of bray and began dragging him towards the farmhouse. Bray began to struggle and was promptly deposited on the ground with a thud.  Tuckett then managed to get the escapee on his feet but Bray resisted and began lashing out with his boots. Tuckett then once again began to tussle with Bray and got him to his feet, so fierce was Bray’s resistance that Tuckett once again dumped him back on the ground.  Remarkably for a sixty three year old Bray still fought on and began throwing stones at his assailant. It seems that at this point Tuckett had had enough and whacked Bray over the head with a stick which prompted the plea, “you are killing me.”  It must have been quite a hefty blow because Bray lay motionless and thinking the man was unconscious Tuckett began to make his way back to the farm to summons assistance from his father. As soon as Tuckett was out of sight Bray sprung to his feet and made off, clearly not only was he a desperate man but also a good actor. By this time Mr. Tuckett senior and another brother had arrived at the scene but despite strenuous efforts the escapee was nowhere to be found. 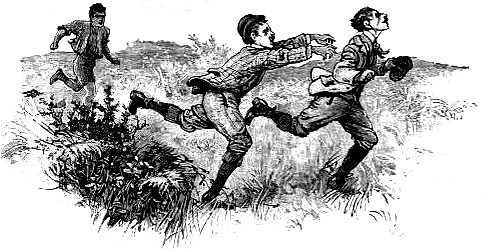 They saught him here, they saught him there … but there was no sign of hair nor head of Mr. Bray, that is until Friday the 24th of July 1884. Later that night he was spotted strolling around the village of Ilsington. Shortly after a girl saw a man fitting Bray’s description climbing through a window of a Mr. Wills’s house at Lounston. Seeing that he was being watched the mystery man immediately scuttled off down the road.  This sighting was reported to the local Police Constable, P. C. Adams, who at two o’ clock the next morning rode over to Ashburton to alert the police and warders who were stationed there. In the mean time Bray had broken into the house of Mr. Willaim Leach, the gardener at Buckland Court where he stole a jacket anda n iron spike. Following P.C. Adams’ visit to Ashburton the warders accompanied by a police sergeant and two constables set off to Lounston and began searching the nearby brakes and copses.  In one of these they discovered a prison jacket, an iron plough chain and a garden tool, all evidence that Bray had been there. Then came the news that a farmhouse belonging to Mr. Mortimore of nearby Woodhouse Farm had been broken into where a number of items had been taken. These included a hat, a flannel shirt, a butter basket, a table knife, half a pound of butter, two loaves of bread, several pounds of cheese, four dozen eggs, some cooked meat, biscuits, sugar, some currants and cream. All sure signs that he was stocking up his ‘larder’ and had no intention of starving.  The search for the escapee continued well into the night but once again there was no sign of the elusive Bray.
On the morning of Monday the 30th of July, 1884, Mrs Nicholls went into her cow shed at Ellimore Farm near Lustleigh to collect the eggs.  Imagine her shock when amongst the straw and sacks she found a strange man hiding there. Immediately she dashed off and found the local policeman and both returned to the farm but once again the ‘man’ had fled. Later that day the mystery man was spotted at another nearby farm by Mr. Wills the farmer and his son. Once again a chase ensued but this time the man was caught and firmly restrained until the police arrived. Sure enough they soon confirmed that it was John Bray looking in a distressed state and seemingly not too sorry to see his captors. He was still wearing some of his prison clothes along with the stolen hat and shirt and in his possession was a turnip hoe and the basket with all the stolen provisions still inside. Bray was then escorted to Moretonhampstead lock-up and returned to Dartmoor Prison the next day after eight days at large.
On the 16th of August 1884 Bray appeared at the Ashburton Assizes charged with two offences of housebreaking whilst at large from Dartmoor Prison. It was stated that after being returned to Dartmoor prison he became ill and it was only in the last couple of days that he was deemed fit to attend the hearing.  When hearing the case for breaking into Woodland Farm it transpired that in addition to the goods stolen as noted above many more things were taken. These were; a tin dipper, a jar of jam, a pan of milk, two halters, bolster cases, a waistcoat and a pair of stockings. P.C. Bartlett also described how after he had taken Bray into custody they travelled to Moretonhampstead lock-up by train. During that journey for some odd reason Bray threw his hat out of the carriage window? P.C. Adams then gave his evidence whereby he stated that when he visited Woodhouse farm he found that the dairy window had been forced open and on the ground was a boot mark which clearly showed the prison broad arrow. The Bench committed Bray to trial at the Assizes and he was then taken  to Exeter Gaol.

On the 3rd of November 1884 Bray appeared at the Devon and Cornwall Winter Assizes charged with the two offences of burglary and found guilty. Then on the 4th of November he reappeared for sentencing. The Judge it appears seemed to have a great deal of sympathy fro Bray as he described the two burglaries as being “trivial.” He also remarked how being dressed in prison garb Bray he would have found it hard to get food without being recognised. Additionally he added that what was stolen from Woodhouse Farm was merely food and that no valuables had been taken. The judge also feared that if Bray was returned to Dartmoor Prison he could well be subjected to harsh treatment in light of his attitude and escape. Therefore it was decided to sentence Bray with five years penal servitude to run concurrently with his existing sentence which was to be served at Pentonville Prison. His final comments were that he trusted that this sentence would; “induce the prisoner to make the best of his miserable life and, by his improved conduct, requite him for the consideration he had shown.” A calendar of Bray’s previous offences was also read out – July 1866, being in an outhouse – 28 days imprisonment, February 1868, four charges of larceny – seven years penal servitude, 1874, stealing a bill hook and shovel – seven years penal servitude and five years police  supervision and 1882, stealing horse hair and clothing – seven years penal servitude exterminating at the expiration of the present sentence.
In the history of Dartmoor prison escape attempts go this was not a bad effort especially as at the time John Bray was sixty three years old. All in all in his adventure he must have travelled a good twenty miles from the prison