The Blowing Stone is another of the ‘Dartmoor Gems’, there is not really a legend about it but more of a tradition, hence its inclusion. The story goes back to the time of the Venville Men and their rights. In 1382 at a court held at Lydford castle it was agreed that people living in adjoining parishes to the Forest of Dartmoor could graze their animals on the moor providing certain terms were met. These were that a fee was paid for the pasturage of the animals, known as ‘Fin Ville’ or ‘fyne de ville’, and that they had to ensure that the animals were only in the forest (moor) between sun up and sun down. Any owners contravening these rules would have their animals impounded and could only reclaim them upon payment of a fine.

At this time the forest was divided up into four quarters and each quarter had a ‘moorman’ or ‘agister’ in charge of it. Each quarter also had its own pound. The Northern Quarter had a pound at Creber and the Southern, Western and Eastern Quarters shared a pound at Dunnabridge. The agisters would send all stray or errant cattle to these pounds.

In former times the Duchy would hold ‘drifts‘, on these occasions the cattle and ponies would be rounded up and any that were found to be illegally depastured would be put in a pound and once again the owners had to pay a fine to get them back. The Reeve or Head Forester would secretly arrange a day when a drift would take place. He would then inform the agisters who on the day of the drift would enrol the help of the Ancient Tenement Holders. These tenants were duty bound to assist and had to provide, in addition to themselves, horses and one worker. The effectiveness of a drift depended solely on its secrecy, clearly if advance warning was given the venville graziers would simply remove any illegally grazing animals. 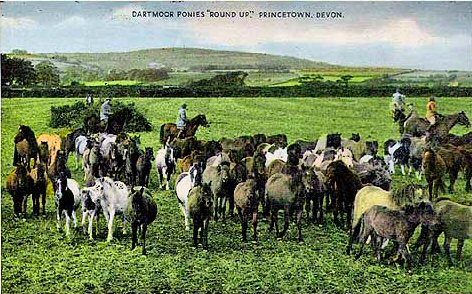 Early postcard of a ‘Pony Drift’.

On the day of the drift the reeve had to sound a cow’s horn at dawn to warn the Venville Tenants that a drift was about to commence. In an article in The Queen Magazine of the 12th of September, 1896, Baring Gould notes the following; “On certain tors are holed stone, through which horns were formerly passed and blown on such occasions.”There is even an instance of a reeve being fined for not doing so. In the last years of the drifts, owners of impounded animals were fined 5 shillings a head and if any animal had not been claimed within three weeks it was sold at auction and any profit went to the Duchy. The last time the drift horn was heard was in 1843.

It is assumed that on drift days the reeve climbed up to some high point to blow the drift horn, In one instance on the Southern Moor, in order to amplify the sound a flat slab of granite with a hollow in it was used. The horn would be blown into the hollow thus magnifying its sound. This stone was called the ‘Blowing Stone‘ and today there is one known example left. It has been removed from its original location and built into the base of a wall. As can be seen from the photograph below the concave hollow is where to horn would have been blown into. 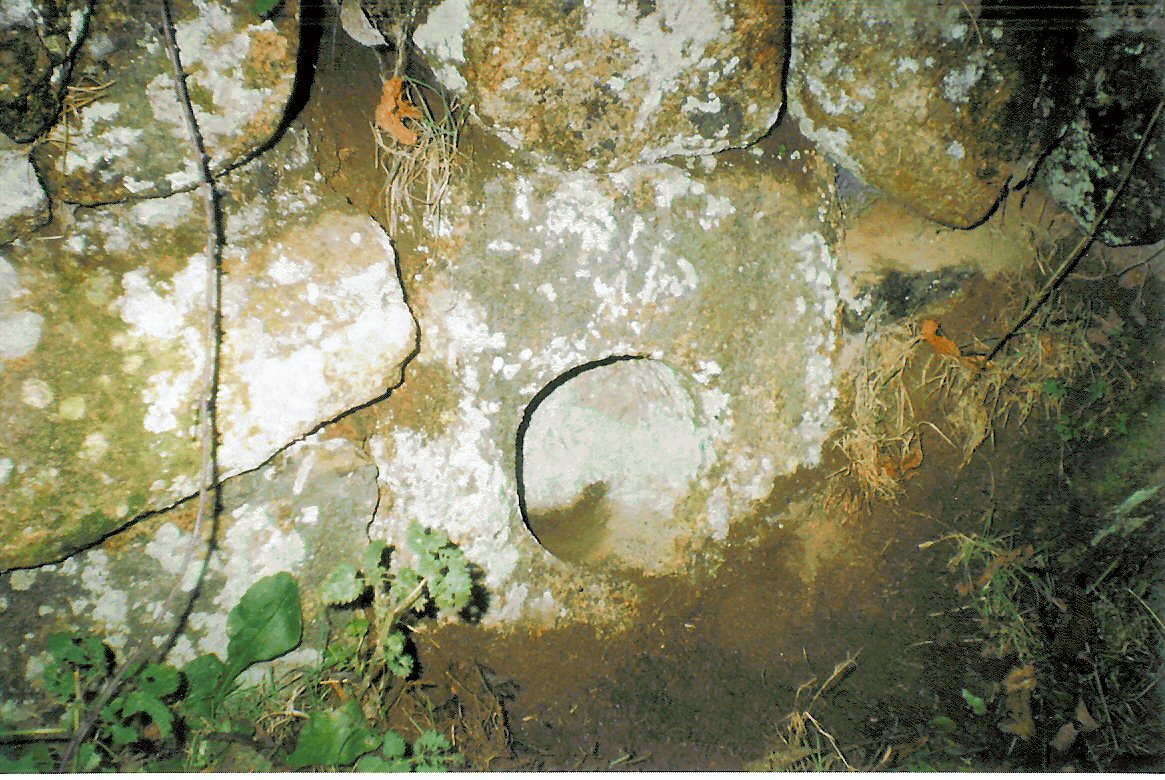 Crossing,concurs when he notes that “a block of granite known as the Blowing Stone; circular cavity is formed on one side, against which the horn was blown, with the idea of increasing the sound.”, pp73-4.