On the south eastern edge of Dartmoor is a rather unspectacular pool known as ‘The Bloody Pool’. It is rumoured that this was once the site of a furious battle between a marauding band of Viking warriors and the local army. Many a brave soul lost his life that day in the shield wall and many were wounded. For hours the two mighty armies stood shield to shield, hacking and slashing at each other. Eventually the invaders were forced to flee back to their longships and return to the sea. The mighty dragon of the Norsemen had been sent home in disgrace but this was no consolation to the widows and fatherless children left weeping at their losses.

To this day it is said that the ghostly sounds of battle can be heard coming from the pool. At certain times, tradition has it that the marshy pool turns red, this is from the blood of the slain warriors who lie buried beneath its still waters. In 1854 a hoard of what were thought to be bronze spears were found near to the pool, it was first thought that these were spears used in the battle but then early archaeologists indicated that they were Bronze Age fishing spears.

If we first start with the belief that there was a battle between local warriors and marauding Norsemen – this cannot be confirmed. However it is a known fact that for many years the Vikings were active in Devon with attacks and raids all around the coasts and inland at Exeter, Tavistock, Lydford. Totnes lies about 6 miles to the south-east of Bloody Pool and was one of the four Devonshire Saxon burghs.  which lies about 10 miles south-east of Bloody Pool. The Anglo Saxon Chronicle, Swanton, 2003 p.65,  records that in the year 850:

“Here Ealdorman Ceorl with Devonshire fought against the heathen men at Wicga’s stronghold and made a great slaughter there and took the victory.”

The footnote on page 64 tentatively suggests that although the place has not been identified, Wicga’s Stronghold  or Wicganbeorg could be modern day Wigborough in south Somerset. Gore 2001 p.35-6 on the other hand states that Wicganbeorg is possibly now a small hamlet called Weekaborough which lies about 10 miles east of Bloody Pool. Glover, Mawer and Stenton in their definitive book,  Place Names of Devon, p. 506, are non-committal as to whether Weekaborough was Wicganbeorg because they note that in the transformed 1827 version of the place name, i.e. Wickaborough,  the vowel development needed to change the voiced cg to the unvoiced k would be difficult though not impossible. But it still could be possible that there was a battle or skirmish at Bloody Pool If Weekaborough was the Wicganbeorg mentioned in the Anglo Saxon Chronicle.

As to the story that in time of flood the water runs red from the spilt blood of the warriors, clearly that is a nonsense but as always there is a possible reason for the strange occurrence. This time it is necessary to look at place names and also local geology. As can be seen from the map below there are two places above bloody pool called Reddacleave and Reddacleave Brakes. 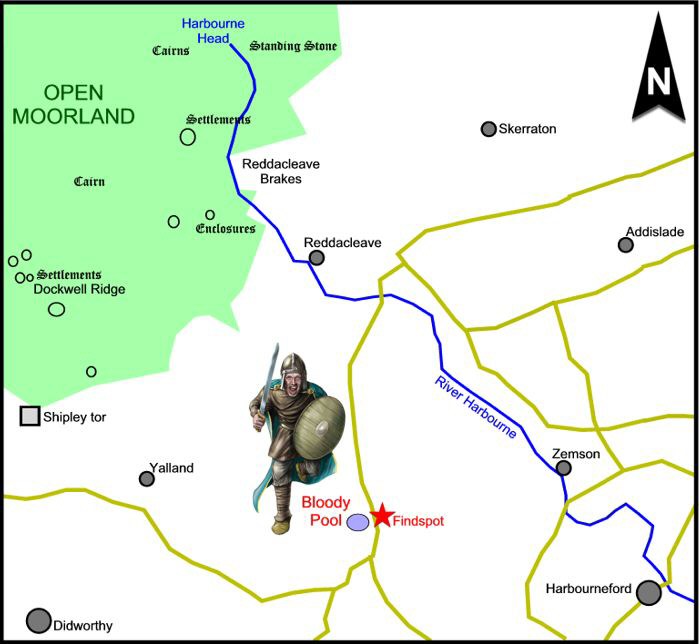 There are many place names on Dartmoor with the descriptive element red and when applied to streams or brooks it usually indicates that the stream bed literally is of a red hue. This is due to the presence of limonite and Hemery, 1983, p.58, describes it as being “a reddish substance of paste-like consistency that clings to stones in the peat-bog stream-beds in their upper reaches, during periods of drought when the water is low and the current sluggish. It results from the oxidation of ferrous carbonate, a derivative of the bog.” Could it possibly be that the reason the pool turns red is due to the limonite giving the water a red hue as it does elsewhere on the moor?

With regards to the hoard of Bronze Age fishing spears, this is a fact and they were discovered in 1854, a fact first noted in Crossing’s book ‘The Ancient Stone Crosses of Dartmoor, p.10. He also notes that they could be seen at the Albert Memorial Museum in Exeter. Today the findspot is recorded as being SX 7029 6263 and they are classified as being “four bronze spearheads and ferrules, each broken in three places”. They have been dated to the Bronze Age and carry an ID Record of NMR SX 76 SW 14, described as consisting of “four bronze ferrules, 7″ long found with four barbed bronze spearheads which are 14″ long, all but one was broken. suggested as a Merchant’s or Founder’s hoard.”

The map above clearly shows many Bronze Age features such as Enclosures, settlements, cairns and a standing stone so therefore it is no surprise to have discovered a Bronze Age hoard. What is interesting is that it should have been discovered by a pool, according to the NMR report they are considered to  have belonged to a founder’s or merchant’s hoard but was this in fact a votive offering of some kind? Pearce, 1978, p.76, remarks that:

“… spearheads like this form a well-recognised type and are often found as groups or hoards in contexts which suggest they were ritual offerings. The Bloody Pool spearheads may have been thrown into water, and everything we know about the late prehistoric religion suggests that this was a characteristic method of dedicating offerings to the gods.”

Hundreds of votive offerings have been found in Britain and many of them have been deliberately placed in water. Another similarity that most show is that they have been deliberately broken. Parker-Pearson notes that this act of deposition and destruction at Flag Fen was as if the site was being used as a “wishing well on a very grand scale, 2005, p.109.

There may be no connection but as can be seen on the above map, there is a standing stone near the source of the river Harbourne which is just upstream from Bloody Pool. None of the other identified standing stones on Dartmoor are sited so close to a head spring as this standing stone, known as Harbourne Man. Could it possibly be that sometime during the Bronze Age the main cult of worship in this area was one concerned with water?