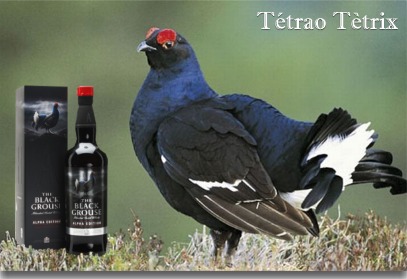 Today probably the only chance of seeing Black Grouse on Dartmoor is on the label of that ‘famous’ bottle of whisky behind some inn’s bar. According to Smaldon (p.71) one of the last reported sighting of the bird was on the 26th of April 2005 at Kitty Tor. The first record of a sighting of six Black Grouse was in the valley of the Plym in 1917 and during the mid 1900s both this valley and the south moor was home to a fairly large local population of birds. He suggests that some of these birds may well have originated from the early indigenous population which was thought to have been centred on southern Dartmoor. There were also some early recordings of Black Cock on the north moor and around Fernworthy with a well established ‘lek’ or mating site on Assycombe Hill which was in use during the 1920s and continued being used into the early 1950’s (p.70). A similar site was known to have existed on nearby Merripit Hill throughout the 1940’s with the last recorded sighting in the area being made in 1953. In the late 1940’s 25 birds were released in and around the Bellever plantations which resulted in a lek being established in the fields to the west of what is now the Youth Hostel, formerly the Duchy farm. At its height this lek held around seven displaying males but the local population fell dramatically in the 1950s with the last of their numbers being shot by forestry staff. The last recorded Black Grouse at Bellever was in 1954.
So what led to the decline of the Black Grouse on Dartmoor? Firstly, as Rowe mentioned the bird was subjected to a great deal of poaching, probably by miners and peat cutters who worked on the heather moors. In a way it is the grouses’ natural reaction to danger that made it an easy target for poachers as when danger threatens, especially in young birds, their natural reaction is to crouch low in the vegetation and sit perfectly still. It is only at the last moment they will attempt to fly away which is when the dogs would catch them. Additionally the males also have the habit of sitting in high vantage points such as walls or the tops of bushes, again a simple target for the hunter. A task made much easier by their slow, cumbersome flight speed, this also made them simple targets for anyone with a gun. Then there was the ‘legal’ type of game hunting, namely, as can be seen above the organised shooting of the birds. Another cause (as mentioned above)  of decline would have been the increase in livestock numbers on the moor which along with heavy swaling led to a loss of heather which is the grouse’s natural habitat. Only one week ago (April 2018) a huge gorse and heather fire broke out near Watern tor and was reported to have a fire front of some 2 km by 3 km. This clearly shows how much damage can be done on Dartmoor when such a fire breaks out what devastation would have been caused to the natural habitat of the Black Grouse.
One really off the use for killing black grouse was back in the 1800s when a remedy for scrofula (tuberculosis of the neck) was to rub the blood of a Black Grouse into the swollen glands to relieve the pain and cure the condition.
However, it just may well be that the Black Grouse has not been lost to Dartmoor afterall as there have been a couple of reliable reports of sightings. According to the Birdforum one of these may well have been in the Hexworthy area as recent as 2017?