Today there are still ‘treasures’ to be discovered or rediscovered on Dartmoor. However, before people go grabbing metal detectors etc. I don’t mean gold and valuables. I am referring to pieces of Dartmoor’s history, archaeology and heritage that have suddenly come to light. I would suggest that some of these finds have been the result of observant ramblers accidentally stumbling across them or in many cases letterboxers poking around in search of an elusive ‘box’. If the ‘find’ was important enough in its historical value it would be brought to the attention of such bodies as the Dartmoor National Park Authority for further investigation. One fairly recent example of this was the long lost King’s Way Cross which some ramblers found by chance in 2010.
On the 27th of July 2018 I received an interesting message from Dave Edgecombe. For many years Dave has wandered all over Dartmoor and has come to intimately know the moor. His message read; “Hello Tim! Long time since we last met! I found a fallen cross on Northern Dartmoor some years ago. Jane Marchant of the DNP visited the site and confirmed that it is a cross and placed it on the Devon Sites and Monuments Register. Would you be interested in more information and possibly meeting up to go and see it? I hope you are keeping well?” The conversation then went on to say; “The cross is roughly 8′ tall and 2.5′ across the arms and it’s on Big Whit Hill… I think the cross being there gave the name to the ‘Flock of Sheep Rocks’, and it was possibly there for all the tinners in the area. It is in rough shape laying above tinners mounds above where they seem to think the track used to run.” Dave kindly sent me a couple of photographs of the cross along with a copy of a letter which he received from the DNPA archaeologists which read; “whilst on Cosdon last week, I walked onto Whit Hill to see if I could find the abandoned granite cross. I did locate it and would agree with you that it is indeed a cross. It is difficult to decide whether the break across the middle was deliberate or the reason for its abandonment and it is equally difficult to decide whether it was intended to be erected at the Flock of Sheep Rocks. It would have been a marvellous position for it but I don not think it ever stood upright, there is no trace of a socket or any trig stones around it. If it was destined for elsewhere it seems a very remote and inaccessible place to have chosen to work it. I think that like so many of Dartmoor’s monuments, both ancient and modern its purpose must remain a mystery.”

As far as I can ascertain there is no previous mention of this cross in any of the recognised sources. What two topographical writers do refer to is th ‘Flock of Sheep Rocks’. William Crossing told us that; “passing over Brook Hill on which there is a low cairn. Close to the huts we shall notice a short reave, and not far from this, in a northerly direction is a dilapidated kist, and what appears to be a menhir lying prone on the ground. Below this group the hill, which sinks down to Small Brook, is covered with rocks, between which whortleberry plants grow in great profusion. One cluster of these granite masses near the stream is called ‘Flock o’ Sheep.” – p. 211. As the origins of this cross is a mystery nobody can ever know the exact purpose of its existence. However, as with any enigma there are always several theories attached to them. Firstly, was William Crossing erroneously describing the cross when he spoke about a prone menhir? At the time it could well have been partially covered with whortleberry plants thus concealing its true form? Secondly, as Dave Edgecombe suggested, could the cross have been intended as some kind of preaching cross for the tinners who were working in the area. The frustrating thing is not being able to precisely pin-point the exact location of the ‘Flock O’ Sheep’ Rocks’ as all descriptions are so vague. Even Hemery’s description is somewhat unclear; “north of the hut circles under ‘Flock O’ Sheep’ rocks and a clitter on the slope of Big Whit Hill, is another ruined pound (marked by OS) and near it some small hut circles.” – p. 828. Mike Brown in his Gazetteer of Dartmoor Names suggests an OS grid reference of SX 628 907. This then begs the question as to there being any connection between the cross and the place-name of the rocks? By this I mean were they so called because it was a preaching cross where the tinners were the ‘flock of sheep’ receiving religious instruction? Sadly as it is impossible to date when the place-name came about and the date the cross originated from we shall never know.
So, take the above suggestions as a pinch of salt that leads to the final puzzle. If the cross was fashioned in-situ with the intent of siting it elsewhere why would the stone cutter want to fashion it in such a remote and exposed spot. Look at any map and you can see exactly how remote an area it is and also how many other more suitable locations there are to carry out such work. Both nearby Cosdon and the Belstone Tors are locations known to have been used by stone cutters all being easily accessible. This then leads on to the next question, why was the work never completed? As you can see from Dave’s photos above there is a clear split in the shaft. Was this accidental and the stone cutter simply abandoned the project? Was it deliberate for some reason thus rendering his work unusable? – again we shall never know. This is not the only example of partially finished granite crosses on Dartmoor and probably the most famous is that which sits on Rippon Tor and likewise the one on Great Links.
But what we do know is that the unfinished cross is another part of Dartmoor’s heritage. My thanks go to Dave Edgecome for sharing his find along with his photographs thus enabling this web page.

Thanks to Paul Buck for sending the precise GPS location of both the cross and ‘Flock O’ Sheep Rocks’ as can be seen below. 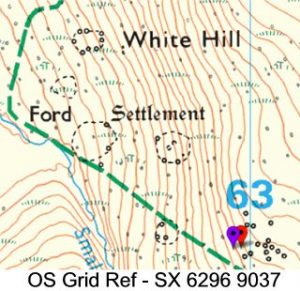