Over the past hundred years or so numerous Dartmoor locations and landscapes have been used in Big Screen movies. and television productions. Probably the most famous being War Horse which used Ditsworthy Warren as a setting. You can nearly trace the evolution of cinematography and production techniques with films that were shot on Dartmoor. For instance in 1929 Anthony Asquith directed two silent  films which used various locations on and around Dartmoor in 1929 – ‘The American Prisoner’ and ‘A  Dartmoor Cottage’ which was one of the last silent films to be made. Also in 1929 other scenes for another film were shot around the Sourton area. This one was originally called ‘Primitive Passions’ and was directed by Mr. Sinclair Hill for the British Talking Pictures Ltd. As far as Dartmoor and Great Britain were concerned this was the first ‘talking picture’ to be produced but when it finally reached the cinemas its title had been changed to ‘The Dark Red Roses’. The main stars of the film were Stewart Rome, Hugh Eden and Frances Doble with cinematography by Arpad Viragh. The story-line involved a sculptor named David Cardew (Steward Rome) and his glamorous wife Laura (Frances Doble). Then comes along a handsome cellist called Anton Falk (Hugh Eden) with whom Laura Cardew falls deeply in love with. So deep was her infatuation that she persuaded her husband to make a cast of Falk’s hands. By this time he realised what was going on between his wife and the cellist and hatched a jealous plot to cut off Falk’s hands whilst making the cast – thus putting an end to his career and hopefully the love affair. Should anybody be interested as to the ending I will not spoil it by going any further. Virtually all of the interior scenes were filmed at the Wembley studios with the exterior ones filmed on Dartmoor. 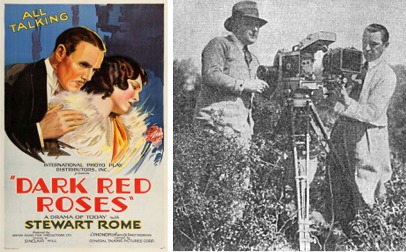 The Film Poster along with Sinclair and Viragh filming on Dartmoor

Now imagine you were Mr. Sinclair Hill and as a director you had firm ideas of how it should be filmed. You have successfully completed all the filming at Wembley and take the film crew to the temporary quarters at Okehampton. Oh, and I forgot to mention it’s July. The exterior scenes were to comprise about one fifth of the whole film and were to appear at its beginning and end. With such a dark plot Sinclair was insisting that some of the features and landscapes they were filming were to be enveloped in a traditional thick Dartmoor mist. Anybody who is well acquainted with Dartmoor weather knows one thing – it’s unreliable. Sadly on the days they were filming Dartmoor put on a spectacular show of summertime with bright sunlight and azure blue skies with not a wisp of mist to be seen. However, ‘the show must go on’ and in true theatrical determination this problem was soon solved by means of a smoke machine. So the all equipment was loaded on a van and trucked over to the Sourton area. They had managed to find an old, traditional grey granite Dartmoor cott complete with a thatched roof studded with green moss and quaint outbuildings. As a backdrop to the cott Dartmoor had thoughtfully provided a rising moor, cut by hedges into patchwork patterns with a couple of lofty granite tors thrown in for good measure. The story-line dictated that the cott was to be lost amidst a swirling, dense pall of Dartmoor mist so the smoke machine was set up at the back of the cott. Eventually Artpad the cinematographer had lined up and focused his camera and the call went out for ‘action’. It did not take long for clouds of smoke to begin wafting over the cott presenting a pretty fair imitation of Dartmoor Mist and so it was considered a wrap. The rest of the day was spent filming various typical Dartmoor landscapes until the arrival of dusk. At that point the scene was to depict a moorland night search which again was successfully filmed. The next couple of days were spent filming specific scenes and landscapes before all and sundry returned to Wembley for editing. As this was the first attempt at a ‘talking picture’ all the spoken scenes were shot in the studio. However, clearly pleased with his Dartmoor experience Mr. Hill had aspirations for his next film. In this with the help of what he described as ‘stage artists’ who had the ability to ensure clarity, diction and expression. Should this happen then he considered that it would provide an edge against the American competition because in his words; “the English speech is much superior to that of the American.