Ever since prehistoric man began to inhabit Dartmoor there has been the need to define boundaries. One way of doing this in the Bronze Age was by delineating community boundaries with low, stone walls known as reaves. It is unknown whether menhirs and cairns also acted as boundary markers but in some senses this makes sense. Where distinctive boundaries were not marked by reaves it may be possible that Bronze Age man used landmark features such as rivers, streams, tors or prominent rocks and boulders. If this was the case then there must have been some way of teaching youngsters the limits of their ‘tribal lands’ so that their inheritance could be recognised. Could it be that on some special day in the year the elders marched the youngsters around the various boundary markers of their lands? Things became easier with the advent of the written word when land boundaries were written down except that the average villager could not read and write. Did this mean that the villages and settlements still used to haul the successive generations around the physical land marks. For those with enough status to read and write the boundaries were firmly fixed on parchment as many of the Anglo Saxon land charters show. However some experts believe that it was in these times that the physical walking of land boundaries began.

The first documented inspection of any land boundary was in 1240 when, “twelve true knights”, completed the first recorded perambulation of the Dartmoor Forest bounds. This process was repeated on several occasions down through the ages. But with the coming of the defined parishes of Dartmoor there was a clear need for defined boundary markers. This resulted in a combination of bound or bond stones and physical landscape features being used for the purpose. Again, not everyone could read and so in order to commit to memory the various boundary limits and markers the parishioners would trawl around with the youngster in tow. This impressed on all and sundry exactly where their parish started and finished. In many cases the young boys would be subjected to acts of violence which would result in a prison sentence today. There was/is a variety of ways the children were reminded of each boundary marker. The ‘bounders’ in many parishes would avail themselves of ‘wands’ or sticks of either birch, willow or hazel. Some would whack the relevant boundary marker with sticks and others would whack the kids with sticks at each boundary marker. Some of the more sadistic would upturn a child at each bond marker and bounce their heads on it. Let’s face it, if as a youngster you had your head rammed against a lump of granite, once you regained consciousness you are hardly ever to going to forget that rock. At Belstone things used to be a bit more complicated because the oldest parishioner would upturn the youngest parishioner and whack his backside with the Union Jack and then bounce his head on the boundstone. In 2000 the youngest parishioner happened to be only seven weeks old?

If anyone was wondering how many parishes are within the modern Dartmoor National Park boundary there are 47 including Lydford which encompasses the Forest of Dartmoor – see illustration 1.

It is not surprising that this ceremony became known as ‘Beating the Bounds’ and was held at regular intervals, usually every seven years. Each parish traditionally beat the bounds on set days, some prefer Rogation-tide which at one time was the ancient feast of Terminus who was the god of boundaries. Other parishes will beat the bounds on Ascension Day, one such being Okehampton where it is known as ‘Spurling Day’. Although it seems fairly pointless today at one time it was asserting the parish grazing rights which meant people’s livelihoods. On southern Dartmoor the boundaries of Ermington coincided with fishing rights on the river Erme, another valuable asset which was guarded jealously.

So what happens on the day of beating the bounds? Basically the idea is to walk around the entire length of the parish boundary which in some cases is a long walk. As mentioned above once a boundary marker is reached then something is whipped albeit a boy or a stone, or heads are bumped against the marker. At Belstone there must have been some remorse for tradition states the boys that have experienced physical harm recieve payment in the form of a new coin of the year – hush money!  The folk of Buckfastleigh who had taken place in the perambulation would scramble for handfuls of coins that were tossed on the ground. Okehampton people did similar but they fought for apples and nuts which were thrown into various bogs and mires. The menhir on Shoveldon is a boundary marker for several parishes and it has been tradition that races would be held to see who could climb up the stone the quickest. No beating of the bounds would be complete without the refreshment wagon that would be stationed at a convenient point. This would be loaded with food which after a morning’s long tramp was gratefully devoured. Today the food wagon tends to take the shape of a Land Rover or such 4 wheel drive vehicles. At one time the Bridestowe people would have a wagon loaded with buns and the ceremony became known as ‘Beating the Buns’. Tradition has it that in many parishes the completion of the beating of the bounds is marked with a barn dance and plenty of strong drink.

There is a good description of a beating the bounds ceremony in Coxhead’s book – Old Devon Customs (pp. 64-5). This took place on the 2nd of August 1909 at Buckfastleigh:

“ After being photographed, a start was made at 9.a.m., in a westerly direction, through hedge and ditch, to New Bridge, where the party were soon joined by Mr. Frost, representing the Hon. R. Dawson. At the east corner of Odey Bridge meadow they crossed a road leading to Holne where a large bondstone was found. Three of the youngest boys of the company stood on their heads on this bondstone and were presented with new copper coins, and a general scramble for pence and halfpence took place. A thick drizzling rain came on, and a very woe-begotten party they looked as they travelled up by the right side of the stream outside of Scorriton Down Hedge to a boundstone, and then to Sitting Down End. Here they found a cart laden with welcome refreshments. Tracks were then made for the moor, over which was hanging a thick, heavy rain mist. At Bourne’s Pit they were joined by representatives of the “Duchy,” Mr. A. E. Barrington, of Princetown, the steward and his Reeve, Coaker, with two others. At “Peter on the Mount,” 1692 feet above sea-level, another bondstone was reached, and the youngsters’ heads were again bumped and their pockets made heavier by coppers. At the outer Pupers Rock the moor was very boggy, and one of the horsemen was thrown, owing to his horse getting into a deep water-hole, but no damage occurred to horse or rider. After refreshments and a rest at Wallaford Down, racing was indulged in, the chief event being a horse race, which Mr. W. Rogers’ Miss Marsh won easily. There were also foot races. Another start was then made, and Rowden Cross was again reached by 7 p.m. Here again refreshments were served, and coppers scrambled for. In conclusion the Steward, Mr. A. Michelmore, thanked all those who had “beaten the bounds,” and three hearty cheers for the King concluded the day’s work. It was estimated that the total distance covered was nearly thirty miles.”

If the timing and distance is correct this must have been an arduous day to cover 30 miles in 10 hours for anyone without the luxury of a horse or pony. It would mean walking at least 3 miles an hour over what can be a very boggy area of the moor.  Incidentally, the actual name, Sitting Down End became into being because as mentioned above this was one of the places where the bounders sat down for a rest and some refreshments. Even today the spot and the boundstone are still known as such. 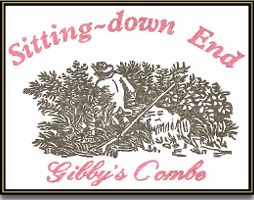 Very often on the boundary walks if it was deemed that the parish inscriptions were becoming unreadable they would be re-cut and restored as they were visited. It is amazing, even in seven years how a combination of weather, mosses and lichens can obliterate even a deep cut inscription. Many of the Dartmoor Boundstones have specific names, some relate to their physical location and others have personal names most of which have lost their etymology. A few examples being; Little Anthony, Old Jack, Aaron’s Knock, the John Stone, Old William, Woodley’s Post and more latterly Arthur’s Stone. Other stones are known by animal or bird names, examples being; the Grey Mare, the Drossell Stone, Fieldfare Head, the Grey Goose, and the Grey Wether.

In some cases the actual stone is referred to as a ‘post’ i.e. Emmett’s Post, Stumpy Post, and Stoney Post. But I think of all the boundstones my favourite has to be the ‘Troll’s Table’ which is on the Chagford Boundary.

One of the stranger places to follow a parish boundary is on the line of South Brent’s limits. The actual boundary goes through the Avon Reservoir which means the bounders have to walk through a tunnel under the dam. In some parishes it was tradition to hold races and other sporting contests throughout the day.

Over the centuries they have been boundary disputes which have turned a bit nasty with parishioners brawling on the moor. There is one particular stone on the Belstone boundary which stands near the confluence of the river Taw and the Small Brook. Often the stone got pulled up and tossed into a nearby bog because it was thought to be an encroachment on their lands by the folks of South Tawton and visa versa.  In 1987 when South Tawton were beating their bounds the Belstone folk turned up to ensure their boundary stone stayed put. Instead of brawling the two sets of parishioners settled on a tug-of-war across the stream.

The millennia year 2000 saw many lost boundstones replaced on Dartmoor as a celebration of the new century along with many parish perambulations.