“Here stood Bair Down Man, a lofty menhir that wrote humanity upon the wilderness… those uplifted fragments of unwrought rock that stood where the bygone people worshipped their spirits or buried their dead—were but scratches on earth’s face to tell that here the ” old men ” had intercourse with heaven.” – Eden Phillpotts, 1902. The River, p.45.

Beardown Man – sounds like the Dartmoor equivalent of Grizzly Adams but sadly there is no bear or man just a huge pillar of granite. But having said that this is no ordinary pillar of granite, it’s a very, very old pillar of granite erected by ancient hands over 4,000 years ago. This particular longstone or menhir stands amongst the giants of the 12 Dartmoor examples, in fact it is the second highest one on the moor. Beardown Man can also claim to be located at the highest altitude of all the moor’s menhirs – 542m. The stone stands approximately 3.5m above the ground and you can guarantee there are at least a couple more metres sat under the turf. Beardown Man is also one of the three existing ‘men’ on Dartmoor along with Loughtor Man and Harbourne Man. As mentioned on previous pages the suffix man refers to the ‘Celtic’ word maen which means ‘stone’, so the place-name actually means ‘Beardown Stone’. Apart from Bear Down itself there also are  in the vicinity are; Beardown Bridge, Clapper, Farm, Hill, Newtake, Tors and Warren. All of which would suggest have taken their names from the Down, the first documented record of Beardown can be found in the court rolls of 1498 when it appears as Berdon. My theory on the meaning of the name is that the first element – Ber could have mutated from the old Anglo Saxon word Bearu which meant ‘grove or wood’. The second element dun meant ‘a hill or down’ so put the two together you have the ‘down of the wood’. As the high part of the Down overlooks Wistman’s Wood this does sound feasible?
In 1888 the Rev. S. Baring Gould wrote the following account of what appears to be his first visit to Beardown Man;  “Recently (May, 1888) I have been to Bairdun Man, a monolith under Devil’s tor, in one of the most desolate parts of Dartmoor… It lies 1783 feet above the sea. Curiously enough, in the new Ordnance Map a mistake has been made about its site, a group of rocks south of it is put down as Bairdun Man, and the menhir itself is simply marked as “stone,” and not in Old English letters, as used to indicate objects of antiquity. It stands near Devil’s Tor, and I have little doubt contributed its name to the tor; for the great stone is perfectly black, so covered is it with black lichen. The stone is evidently a top slab from one of the piles of rock constituting the Tor. It faces approximately with the broad planes south by south-east, and north by north-west; but not having a compass with me, I was unable to obtain the directions exactly. It is to my mind, the finest menhir on the Moor; the utter solitude and weirdness of the situation, and the bold character of the stone itself, and its sombre, sable vesture, make it impressive to the imagination. It stands above the present ground-line 10 feet 9 inches; but the ground about it is soft, boggy peat, and I was able to sink a rod 3 feet below, and feel the stone to that depth. It must be planted in more solid soil, and wedged about with stones below that depth. I do not think we can be wrong in supposing that the peat has accumulate round it, since it was planted, to the height of 3 feet, so that originally the stone stood 13 feet 9 inches above the surface. I found some difficulty in discovering the “Man,” as hardly anyone at Two Bridges had seen it. I was directed finally by an old moorman who was cutting peat on Beardun, who told me, pointing to a pile of rocks, to keep “that Man” on my right. Apparently a survival of the Cornish “Maen” for stone, and the Bairdun, or as people pronounce it, Beardun,” Man is the Bairdun Stone.” – p.161.
It has alternatively been suggested that the ‘man’ element describes the human like appearance of the standing stones but not are all upstanding figures and some are quite shapeless. The other claim to fame is that this particular menhir is one of three that truly stands alone and is not associated with other nearby Bronze Age features, there is a cairn but it’s about 250 metres away. Having said that there are plenty of Bronze Age relics within the local landscape such as cairns, settlements and a stone row as can be seen from the map below. There is a wonderful paragraph in Crossing’s book – Stones of Dartmoor where he says: “Quietude reigns over the waste, and the shadows slowly lengthen. Far away in the West the sky is filled with a golden radiance, but the heathery hills near by are growing dark. On the heath is a tall menhir, its form sharply defined against the ruddy glow. As it was to the patriarchs of old, so it is to us now. It is a pillar of witness – a witness that those who reared it looked above the earth on which they trod. Looked upward and found a hope, as we may do to-day, for it is a finger that points from that which perishes, and where the day becomes spent, and loses itself in darkness, to a kingdom of light that shall endure for ever“. –p.59.  Take a look at the picture below and you can see in the centre of it the lone figure of Beardown Man pointing into the sky – a pillar of witness if ever I saw one.

If ever you are near the ‘maen‘ pay him a visit and just absorb the tranquil atmosphere that surrounds his moorland vantage point. Some times you can nearly feel a sort of heartbeat pulsing through the granite. Now I do not believe or disbelieve the theory of ley-lines and earth energies, I have seen and felt things that cannot rationally be explained, but if there are such forces then they are definitely present at Beardown Man. One strange happening occurred during the Second World War when the area around the standing stone was included in the firing range. R. Hansford Worth noted that; “Shells fell near Beardown Man.. but happily that menhir suffered no damage, by chance,” – was it chance or was there some kind of earthly force-field protecting it?
But what was its original purpose? Well you can take your pick from the following; a memorial to a tribal leader, a territory marker, a way marker, a meeting place for neighbouring tribes, a neutral place between tribal territories, a ritual monument, a ‘needle of stone’ that penetrates a flow of earth energy or a combination of any of the above. There are several Bronze Age settlements within a 2 mile radius of the stone which could make its location a territorial marker or tribal meeting place of neutrality. The menhir stand on a ridge which could have carried an old trackway to which it could act as a way marker. The only problem with this is that it is not visible from every direction. Beardown Man is sited near several water sources which could provide some ritual association and it may well be an ancient memorial to some tribal leader due to its prominence in certain aspects of the landscape.
There is a tale that the last bear was killed near the stone, hence it’s name but as far as any association with the actual place-name that is rubbish. Near to the menhir is Devil’s Tor, which as tors’ go is nothing spectacular but I wonder if the reason it is so-called is due to the proximity to the pagan Beardown Man which along with other prehistoric remains have been viewed with fear. The stone is not a petrified person who was punished for some sacrilegious transgression, neither does it walk down to the river to drink at certain times of the year – in the realms of folklore it’s sterile, which is a shame.

“Up along, past Devil’s tor, there stands in mist, alone.
Like Nemesis, the Beardown Man, a cruel fate of stone.
It points the way to old Cut Hill – a long dank waste of fen
A living death to unwary beasts, and merciless to men.” 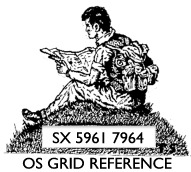