An Adventure on Dartmoor

Someone once told me that “on Dartmoor you can never measure distance by time,” in many cases a most prophetic statement. There can be so many variants such as both recent and current weather conditions, unfamiliar terrain and other such embuggerances. Therefore if you are incognisant with the Moor never believe it when you are told that to get to so and so it’s about ten miles. Here is a prime example from what appeared to be a straightforward excursion from Okehampton to Princetown taken in 1890 by a gentleman from Preston.

“On a fine morning in September I left Okehampton, situated at it’s north-western corner, to cross the moor to Princetown, which is on the great central road running between this town and Moretonhampstead, at its north eastern extremity. The natives informed me that this walk would cover a distance of 15 miles, as the crow flies. I suppose; for, as the sequel shows, I had to “do” not much less than twice that distance. A tolerable road led me up the first hill I had to mount, but beyond that there is no road, not even a sheep track to point the way. The hills and streams, as shown on a good map, were my only guides. I had not so much as a pocket compass to assist me. Neither farm nor cot, nor yet cattle nor sheep were to be seen for nearly the whole distance. My course was to ascend the Yes Tor, 2040 feet, the highest point in England south of the Thames, and then proceed almost due south until I reached the road between Princetown and Moretonhampstead. Unless I got on the road at the “Two Bridges,” where it is crossed by another, between Ashburton on the south-east and Tavistock on the west, however, I was bound to lose time.
The “Two Bridges,” therefore was the point aimed for. It was fully 11 o’clock before I set out on my journey, and owing to a detour in order to view the picturesque ruins of Okehampton  castle, rising so finely from the rocky bank of the Okement, it was quite half an hour later before I was fairly on my way for the Yes Tor, which grandly overlooks the town of my departure, and stretches itself like a huge giant almost due north and south. It is not difficult to climb by the road which passes through the artillery encampment, but in an endeavour to make a short cut I found myself in a bog. At the top is a flag staff on which, when the big guns are in practice, a flag is raised to warn off intending visitors. However, in about an hour I had gained the summit, and had climbed the stack of rocks crowning the hill, and which is one of the distinguishing features of these Devonshire Tors. On Dartmoor, at least, there is scarcely a hill without one at least of these stacks, in which great blocks of granite are piled up horizontally; and sometimes they are so evenly laid as to appear to have been built up by human agency. Now they present the appearance of hoary castles, now of the frowning pyramids, or grim gigantic goblins may be fancifully traced. The uninitiated would imagine that they had been left behind, when the softer portions of the hilly surfaces have been carried away by the powerful forces of denudation. This is not so, however. They now show up pretty much as they did hundreds of years ago, probably, for Dartmoor is of volcanic origin, and its rocky crests were thrust up from below by a stupendous upheaval. 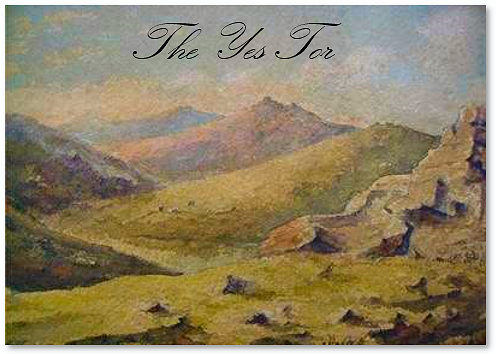 A very fine view is to be seen from the top of Yes tor. To the immediate north is the town of Okehampton, and beyond the great plain of north Devon; to the west, the valley of the Okement, with a very fine wood rising from it, and another great plain extending westerly, farther than the eye could reach; to the east, south, and south-west, various ranges of hills stretching to the south and parallel for the most part, with intervening valleys and streams; while the villages of Throwleigh, Gidleigh, and Chagford could be seen to the far east. When I had arrived at the Links Tor, at the southern end of the Dartmoor giant, it was about two o’clock, and I set about demolishing the major portion of a few sandwiches I had taken with me, reserving a small residue for another meal, in case I found myself much behind time. About 20 minutes covered both lunch and rest. I then descended, and crossed the Okement to the south. Ascending, and crossing the western shoulder of the Great Kneeset I again found myself confronted by an extensive bog. Getting through it as well as I could I followed the slope and crossed the Tavy Cleave.
Now mounting Little Kneeset, I had my first experience of a worse feature than bogland. I refer to the gullies, or deep channels into which the upper slopes of many mountains are torn up by the heavy rains. These came very close and deep, but fortunately they were almost dry. Sometimes leaping and sometimes crossing them at the bottom. I began to find myself, after about half-an-hour fast getting tired, and would have gladly welcomed bogs in preference. If I meant to finish my journey that day, I must avoid these water courses. How? Their beds being firm for the most part, I had only to walk up them to get on firmer and less broken ground, or by walking down I could come on a more even surface. though it might be softer. Either of these alternatives was adopted as circumstances required. Another hill, higher than its neighbours, was now before me, the Fur tor, over 2,00 feet and the second elevation of Dartmoor. The ascent of this from the north was somewhat steep, but the view from the top well repaid me. There are three piles of rocks on the top as in the Yes Tor. One of them towered up as high as a good sized modern house. In another place a large circle almost complete is formed by these stones; whether it is druidical or not I have no information. though the moor in portions, especially around Chagford abounds in such ancient camps, cromlechs and these circles. The villages from my first mount could again be discerned, with the exception of that I started from. But Oh joy! What is that to the south west, apparently some half dozen miles away? Princetown, certainly; the goal of my hopes, the termination of my self-allotted task! 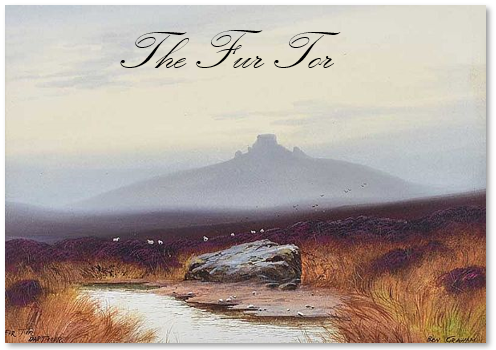 Cheerfully then I set forth once more. Bogs again, gullies too, had still to be crossed, and I again experienced symptoms of my energies being almost exhausted. Making east at first for the Cut Hill, to avoid descending much, I hoped to get on a line of tors, which, both on the map and in the view before me, seemed to be a long ridge running north and south with various elevated prominences bearing the names of Row Tor, Devil’s tor, Lidford tor, Baredown Tor, and Baredown Hill and terminating on the Princetown road. I got on this line of tors, I suppose, but the sun had set and the evening star had appeared, and the moon had risen, before I had another glimpse of Princetown, which was then illuminated, the prison and the barracks, higher and larger than any other building, standing out boldly. As the town was well to the south-west I altered my course in that direction. I descended, I ascended, I crossed several streams, only to find myself apparently farther off than ever, for the town kept persistently out of view. The night was not very clear, so my footing was decidedly uncertain and I had to feel my way carefully. Sometimes the ground was soft, a little marshy even; sometimes it was hard rock; but it was well for me that no more deep gullies or extensive bogs lay in my way, or after the long weary tramp I had undergone I should have scarcely reached my destination that night. I was too far east surely. This caused me to make another descent, to cross another stream, to ascend another steep hill, rocky mounted as the rest. how dreadful those stony goblins looked in the dim twilight! How weird seemed their sharp and jagged outlines on that dark summer evening! An hour previous I had passed some cattle grazing, and here some sheep &c. were stalking about in the semi-darkness, looking when above me much enlarged. These animals must have hinds or shepherds, and owner too. Where are their habitations? For, since ascending Yes tor about noon I had not seen a house only in the far distant villages. Soon afterwards I came across walled fields; another favourable sign that I was nearing civilised haunts.
Once I had to creep through a tunnel made for a stream, luckily very low; the walls topped with furze being too formidable a mount. At another time I had to wade across a swift flowing stream, there being no crossing near. A short marshy stretch, across a small plantation, a rocky climb up a small rise, and I was at last on the road I had been expecting for hours. It was a few minutes short of nine o’clock. But where had I struck the road? Was it on the eastern or western side of the Two Bridges? Following it to the west should I be making for Tavistock or Princetown? By day I might perhaps have been able to distinguish, but not by night. Going westwards I very luckily came across a man who quickly relieved me of of my anxieties in that respect. I was, it seems, going straight on for Tavistock, and had therefore got to the west of the spot I had aimed for. Taking a field road, however, by this direction, I soon found myself skirting the Princetown Convict Station. Crossing the barracks yard I was in the town, and just as the clocks were striking ten I had taken up my abode for the night. I had therefore been 11 hours on the road, and all stops included had not rested for more than an hour.”
The Preston Chronicle, October 25th 1890.